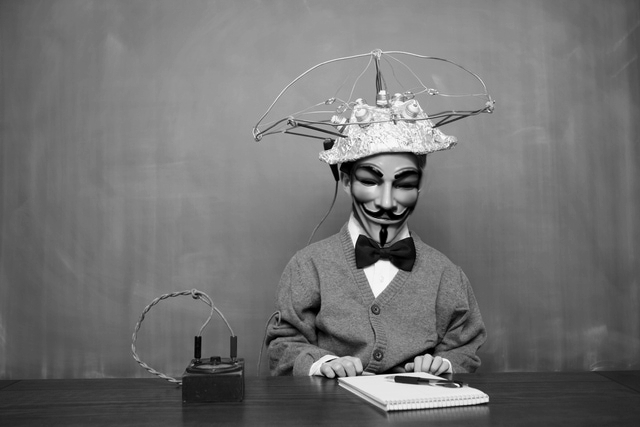 Those at The Idealist Revolution have compiled a list of the most notorious and most popular experiments of all time that show humanity’s dark side.

Psychologist Solomon Asch conducted a series of experiments during the 1950’s that were designed to demonstrate the power of conformity in groups. The experiments involved a ‘vision test’ in which the subject would have to match one line with another. Unbeknownst to the subject, the other participants were assistants of the experimenter. As the test progressed, the assistants would purposefully choose the wrong answers while the actual test subject chose the correct answer. Experimenters wanted to see how long it would take the test subject to finally conform to the rest of the group.

The results of the experiment:

After the experiments were over, participants were asked why they had conformed to the rest of the group. Most responded that they didn’t want to be ridiculed, while a few actually claimed they believed the wrong answers were correct.

There are a couple problems critics have with the experiments, the first being that participants may have been motivated to avoid conflict rather than a desire to conform. The second criticism is that the experiment may not predict real world situations. However, many social psychology experts believe that even though real world situations may not be as clear-cut as in a lab, the actual social pressure to conform is most likely much greater than an individual’s will to go against the herd, indicating that in high-pressure real-life situations, a person is more likely to conform.

This experiment comes from the Biblical story of the Good Samaritan, which is about a man (enter our Good Samaritan) who helps another man in need as the self-righteous walk on by. Psychologists John Darley and C. Daniel Batson wanted to see if religion has any effect on helpful behavior.

The psychologists had three hypotheses:

1. People thinking religious, “helping” thoughts would still be no more likely than others to offer help.

2. People in a hurry will be less likely to offer aid than others.

The participants of this experiment first completed a questionnaire about religion (to help evaluate hypothesis #3). Next, they were instructed to walk from their current location to another building close by where they would give a speech on the Good Samaritan. The level of urgency in their instructions varied. Little did the participants know, the walk to the building itself was part of the experiment.

On the way to the other building, the participants encountered a man in an alleyway, the victim’s condition unknown. Slumped in a doorway, the man would moan and cough as they walked by. The results:

0 = failed to notice the victim as in need

1 = perceived need but did not offer aid

3 = stopped and asked if the victim needed help

4 = after stopping, insisted on taking victim inside and then left him

5 = refused to leave victim, or insisted on taking him somewhere

Upon arriving at the second building, participants were then instructed to answer a questionnaire on ‘helping behavior’. “The amount of ‘hurriedness’ induced in the subject had a major effect on helping behavior, but the task variable did not (even when the talk was about the Good Samaritan).”

There was no correlation between “religious types” and helpful behavior, and the only variable that showed some effect was “religion as a quest”. This means that those who saw religion as a quest were less likely to offer substantial help than those who didn’t. However, later analysis shows this may not be caused by religious difference.

According to the results, a person who’s in a hurry is more likely to ignore someone who needs help, even when going on to speak about the parable of the Good Samaritan. It was noted in the study that some participants actually stepped over the victim on their way to the other building. The implication is that thinking about social norms does not imply that one will act on them when they are focused on more pressing matters.

Similar to the Good Samaritan experiment, the Bystander Apathy experiment was also created by John Darley with the help of Bibb Latané in response to the murder of Kitty Genovese in 1964. Where the Good Samaritan experiment focuses more on the religious influences on the participant, the Bystander Apathy experiment measures how long it takes for participants to act, and whether or not they intervene at all. The results of this experiment indicate that when there is a greater number individuals present, people are less likely to help those in need.

Kitty Genovese, 28, was stabbed to death near her apartment in New York City on March 13, 1964. It had been reported that 38 individuals witnessed her murder without offering help.

While there is controversy behind how many unresponsive witnesses there actually were during Genovese’s murder, there have since been many of these experiments conducted in society, and there can be no denying that the Bystander Apathy Effect exists. Here is an experiment from 2009 conducted in the UK:

Psychology professor, Philip Zimbardo, led a team of researchers in the Stanford Prison experiment from August 14th to August 20th of 1971. Funded by the US Office of Naval Research, the study was meant to record the psychological effects of becoming a prisoner or a guard in a prison system. Twenty-four male students from Stanford University participated in the experiment, all of whom were given randomly assigned roles. The participants adapted to their roles better than Zimbardo could have anticipated, as the guards began to enforce authoritarian measures and subjected some of the prisoners to psychological torture.

As for the prisoners, many passively accepted the psychological abuse, and even harassed other “prisoners” at the request of the guards when they tried to prevent it. Zimbardo also found himself effected by the experiment in his role as the superintendent, ultimately permitting the abuse to continue. Two prisoners quit the experiment early and the entire study was stopped after only six days.

The results of this experiment demonstrate the impressionability and obedience of people “when provided with a legitimizing ideology and social and institutional support.” This is something the citizens of the US are now experiencing on a massive level due to the current police state.

Shortly after the study had been conducted, revolts began at both the San Quentin and Attica prison facilities. Yale University psychologist, Stanley Milgram, conducted the Milgram experiments which focused on obedience to authority figures, or more specifically, it “measured the willingness of study participants to obey an authority figure who instructed them to perform acts that conflicted with their personal conscience.”

The experiment began in response to German Nazi war criminal, Adolf Eichmann. Milgram designed his study to answer the question:

“Was it that Eichmann and his accomplices in the Holocaust had mutual intent, in at least with regard to the goals of the Holocaust?”

In other words, Milgram wanted to know if there was a mutual sense of morality among those involved. The tests suggested that the millions of accomplices to the Holocaust may have been simply following orders, despite violating their deepest moral beliefs. While the tests have consistent results, the percentages vary across the globe.

The Milgram experiments were very controversial. Many scientists considered it to be unethical and physically or psychologically abusive. Others believed it can cause permanent psychological damage as well as causing people to be less trusting in the future.

The participants who played the role of the teacher were unaware that the participant playing the student was actually an assistant to the experimenter, and was not attached to a shock generator. In the meantime, test subjects truly believed they were delivering shocks.

The assistants who played the roles of the students would periodically plead to be released, and some complained of heart conditions. When the participants asked the experimenter if they should continue, the experimenter would give responses such as:

2. “The experiment requires that you continue.”

3. “It is absolutely essential that you continue.”

Morris, W., & Miller, R. (1975). The effects of consensus-breaking and consensus-pre-empting partners of reduction in conformity. Journal of Experimental Social Psychology, 11, 215-223.