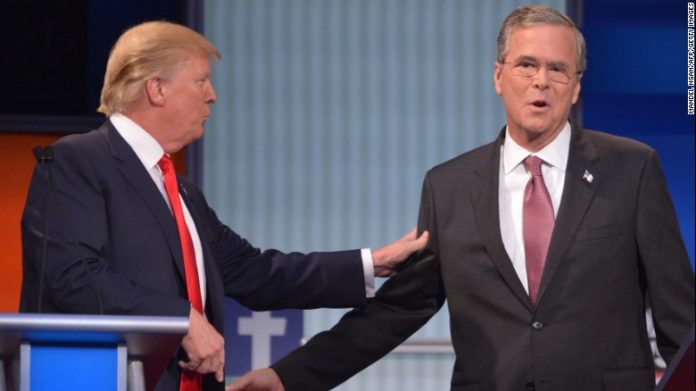 Yet another contender for the throne has fallen; Republican Presidential candidate Jeb Bush announced on Saturday that he was throwing in the towel after finishing poorly in South Carolina. His results in Iowa and New Hampshire weren’t any better, and it would seem that Republican voters at least have had enough of dynastic politics.

“… the people of Iowa, the people of New Hampshire and South Carolina have spoken, and I really respect their decision. So, tonight I am suspending my campaign,” Bush said.

Presidential candidate Donald Trump acted all innocent regarding his role in killing off Bush’s presidential aspirations. “I just don’t know what did him in,” he said, having easily won the Republican primary on Saturday. He had previously called Bush “weak,” and “low-energy,” and “an embarrassment” to his family. Trump had also heavily criticized George W. Bush’s handling of the September 11th attacks and invasion of Iraq.

Ever gracious in victory, projected to win handily in South Carolina, Trump  was full of praise for Bush, “Jeb fought very hard. It wasn’t his time. That’s all.”

“Those last couple of weeks he was on television so much, I was looking, I’d say, ‘Man, I’ve never seen anything like this,'” Trump said to CNN.

In his victory speech he said,  “a number of the pundits said, … ‘Well, if a couple of the other candidates dropped out, if you add their scores together, it’s going to equal Trump.’ They don’t understand that as people drop out, I’m going to get a lot of those votes also.”

On the Democratic side, Hillary Clinton won 52.2% of the Nevada vote, 4.5% ahead of Bernie Sanders.

This article (Trump Feigns Innocence as Bush Gives Up on Presidential Race) is a free and open source. You have permission to republish this article under a Creative Commons license with attribution to the author(CoNN) and AnonHQ.com.