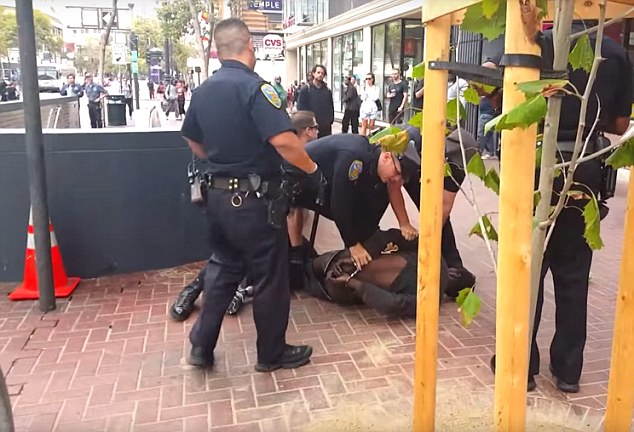 A handcuffed homeless man with just one leg was such a threat to law enforcement officers that they needed no less than fourteen fully grown men at the scene (four to pin him down, the rest to keep the camera-wielding public away).


The whole incident was recorded by journalist Chaedria LaBouvier, and several other concerned bystanders late last year. The officers were called to the scene because the man was waving sticks around. Yes, those “sticks” were in fact his crutches. They were obviously his crutches, yet that sort of detail seems to have largely gone unnoticed by the men in blue, despite the presence of a vocal crowd who kept pointing it out to them.

As the video begins, four officers are seen holding the one-legged man down. One officer steps on his real leg, another holds his head down. An officer soon decides to kneel down on the man’s legs, crushing them to the ground with the his body weight. Throughout, the crowd can be heard loudly protesting the insanity that was unfolding in front of them. The police ignored it all.

More officers arrive; they surround the scene, at which point one cop says “I think they’re OK.” At 2.50 secs in, you can see two officers chumming around – just another day of police brutality at the office for these guys. At this point, the disabled man’s pants is down and you can see his backside.

LaBouvier asks the officers how they are “protecting and serving the community by having this man half naked.”

“If that’s policing, where a man who is handicapped and is half naked on the street is policing, you’re not policing…. I’m a member of this community and I don’t feel protected. I don’t feel safe,” she explains to the hardened officers, who proceed to ignore her. They aren’t concerned about her safety after all; they aren’t there to protect her or her community.

About 4 minutes in, one good Samaritan reassures the disabled man who was worried that the police would execute him, “they ain’t gonna shoot you man, that’s why we have these cameras out here.”

“That shit hurts…I have a fucking sore, an infection, on my leg,” the disabled man says. It takes ten minutes of filming before an officer even bothers to pull the man’s pants up. At one point fourteen officers are at the scene. Most of them were there just to obstruct the cameras. Tax dollars at work.

He is later forcibly sent to the hospital – more to get him out of the public eye than to treat the injuries that they had inflicted upon him, because it turns out that they could not arrest the poor man for anything.

The mainstream media often ignores this sort of incident, because it happens so frequently. And because you’ve read about so many incidents like these yourself, you might be tempted to accept this as normal police behavior – that once in awhile, police officers have to wrestle a half-naked disabled homeless man and pin him to the ground…  That because he is struggling, because he made the officers’ job a bit harder, because he might have been mentally handicapped, because he might have been a nuisance to some shop owner, it apparently justifies any action necessary to subdue him.

Just because something horrible happens often, and to someone else whom you cannot relate to, does not make it OK though. After the Holocaust, the German public understood the cost of normalizing cruelty.

LaBouvier notes that the incident occurred in “the heart of one of America’s most affluent cities, literally outside the headquarters of Twitter.” She believes that these influential types could do much to solve the problem…but they didn’t. She assumes of course, that the police weren’t behaving as the tech giants wanted them to in the first place.
Sources: Medium

This article (Fourteen Cops Take Down One-Legged Man. Four to Restrain, Ten to Stop the Cameras) is a free and open source. You have permission to republish this article under a Creative Commons license with attribution to the author(CoNN) and AnonHQ.com.