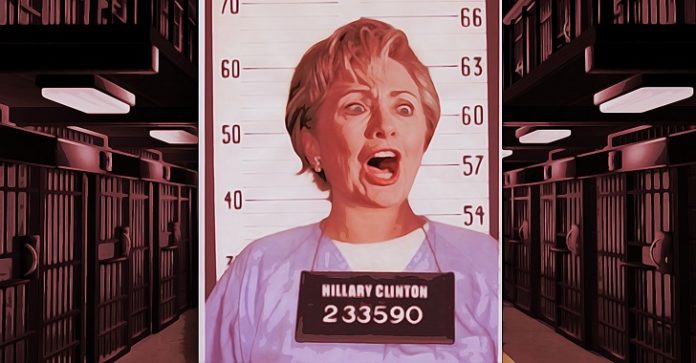 (ZHE Op-Ed) When the Obama Administration, on July 5th, ruled that in regard to Hillary Clinton’s privatized email system while she was Secretary of State, “Our judgment is that no reasonable prosecutor would bring such a case” to a grand jury, because “We cannot find a case that would support bringing criminal charges,” they ignored the following six U.S. criminal laws, each of which undeniably describes very well what she did:

(a) Destruction or Removal of Property To Prevent Seizure

Whoever, before, during, or after any search for or seizure of property by any person authorized to make such search or seizure, knowingly destroys, damages, wastes, disposes of, transfers, or otherwise takes any action, or knowingly attempts to destroy, damage, waste, dispose of, transfer, or otherwise take any action, for the purpose of preventing or impairing the Government’s lawful authority to take such property into its custody or control or to continue holding such property under its lawful custody and control, shall be fined under this title or imprisoned not more than 5 years, or both.

(b) Impairment of In Rem Jurisdiction

Whoever, knowing that property is subject to the in rem jurisdiction of a United States court for purposes of civil forfeiture under Federal law, knowingly and without authority from that court, destroys, damages, wastes, disposes of, transfers, or otherwise takes any action, or knowingly attempts to destroy, damage, waste, dispose of, transfer, or otherwise take any action, for the purpose of impairing or defeating the court’s continuing in rem jurisdiction over the property, shall be fined under this title or imprisoned not more than 5 years, or both.

(1) alters, destroys, mutilates, or conceals a record, document, or other object, or attempts to do so, with the intent to impair the object’s integrity or availability for use in an official proceeding; or

(2) otherwise obstructs, influences, or impedes any official proceeding, or attempts to do so,

shall be fined under this title or imprisoned not more than 20 years, or both.

18 U.S. Code § 1519 — Destruction, alteration, or falsification of records in Federal investigations and bankruptcy

Whoever knowingly alters, destroys, mutilates, conceals, covers up, falsifies, or makes a false entry in any record, document, or tangible object with the intent to impede, obstruct, or influence the investigation or proper administration of any matter within the jurisdiction of any department or agency of the United States or any case filed under title 11, or in relation to or contemplation of any such matter or case, shall be fined under this title, imprisoned not more than 20 years, or both.

(a) Whoever willfully and unlawfully conceals, removes, mutilates, obliterates, or destroys, or attempts to do so, or, with intent to do so takes and carries away any record, proceeding, map, book, paper, document, or other thing, filed or deposited with any clerk or officer of any court of the United States, or in any public office, or with any judicial or public officer of the United States, shall be fined under this title or imprisoned not more than three years, or both.

(b) Whoever, having the custody of any such record, proceeding, map, book, document, paper, or other thing, willfully and unlawfully conceals, removes, mutilates, obliterates, falsifies, or destroys the same, shall be fined under this title or imprisoned not more than three years, or both; and shall forfeit his office and be disqualified from holding any office under the United States. As used in this subsection, the term “office” does not include the office held by any person as a retired officer of the Armed Forces of the United States.

Whoever embezzles, steals, purloins, or knowingly converts to his use, or the use of another, or without authority, sells, conveys or disposes of any record, voucher, money, or thing of value of the United States or of any department or agency thereof, or any property made or being made under contract for the United States or any department or agency thereof, …

Those laws are consequently null and void, by Executive action. When Congress (which is supposed to be the Legislative branch of the government) passed those laws, what were they describing, if not this? Of course, they did describe there what Clinton has, in fact, done.

If we are a nation “of laws, not of men” (as that old basic description of democracy phrased it), then Ms. Clinton will be prosecuted, at least through the grand jury stage, on (at least) those grounds. The decision regarding her innocence or guilt will be made by jurors (first by the grand jurors, of course, and if they find there to be a case, then by a trial jury), not by the broader public – and also not by the nation’s Executive: the President and his appointed Administration. That is what it means for a government to be a functioning democracy. Any government which violates this principle – that it is “of laws, not of men [including women]” – is not functioning as a democracy: it’s something else.

She isn’t even being sanctioned for the violations the the State Department’s own regulations (or “rules”).

This is not a partisan issue. I was until recently an active Democrat, and I joined with millions of other Democrats who expressed condemnation when George W. Bush was allowed to get away with many severe crimes (such as this) while he was in office; and one of the reasons why I was trying to find someone to contest against President Obama in Democratic primaries for the 2012 Democratic Presidential nomination was that Obama had refused to prosecute his predecessor’s crimes against this nation. But now this same Obama is nullifying at least these six laws in order to win as his successor Hillary Clinton, who surely will not prosecute Obama for his many crimes (such as this and this) while he has been leading this nation and destroying our democracy.

I parted company from the Democratic Party when I gave up on both Parties in 2012 as they and the government they operate have been since at least 1980 — not at all democratic, but instead aristocratic:holding some persons to be above the law (that researcher there called the U.S. an “oligarchy,” which is simply another word for the same thing — rule by the top wealth-holders, not by the public: not a “democracy”).

There can be no excuse for Obama’s depriving the public, via a grand jury decision, of the right to determine whether a full court case should be pursued in order to determine in a jury trial whether Hillary Clinton’s email system constituted a crime (or several crimes) under U.S. laws. The Obama Administration’s ‘finding’ that “clearly intentional and willful mishandling of classified information” would need to have been proven, in order for her to have been prosecuted under any U.S. criminal law, is a flagrant lie: none of the above six U.S. criminal laws requires that, but the only way to determine whether even that description (“clearly intentional and willful mishandling of classified information”) also applies to Clinton would be to go through a grand jury (presenting the above-cited six laws) and then to a jury case (to try her on those plus possibly also the charge that there was “clearly intentional and willful mishandling of classified information”).

But now, those six laws are effectively gone: anyone who in the future would be charged with violating any one of those six laws could reasonably cite the precedent that Ms. Clinton was not even charged, much less prosecuted, for actions which clearly fit the description provided in each one of those U.S. criminal laws. Anyone in the future who would be charged under any one of these six laws could prove discriminatory enforcement against himself or herself (in the particular case discussed there, discriminatory enforcement was ruled not to have existed because the enforcement of the criminal law involved was judged to have been random enforcement, but this condition would certainly not apply in Clinton’s case, it was clearly “purposeful discrimination” in her favor, and therefore enforcement of the law against anyone else, where in Clinton’s case she wasn’t even charged — much less prosecuted — for that offense, would certainly constitute discriminatory enforcement).

So: that’s the end of these six criminal laws. The U.S. President effectively nullified those laws, which were duly passed by Congress and signed into law by prior Presidents

And that’s the end, the clear termination, of a government “of laws, not of men.”

This article (Here Are the 6 Crimes Hillary Clinton Should Have Been Charged With) by Eric Zuesse originally appeared on ZeroHedge.com and was used with permission. Tune in! Anti-Media Radio airs Monday through Friday @ 11pm Eastern/8pm Pacific. Help us fix our typos: [email protected].