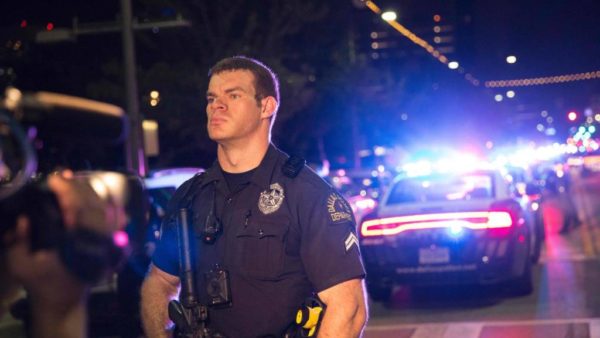 Police in the city of Dallas in the State of Texas, United States have confirmed the death of five of the city’s police officers after a protest in the city on Thursday night.

The protest in the city was sparked by the fatal shootings of two black men, Philando Castile and Alton Sterling, by police officers in Minnesota and Louisiana. The two devastating incidents have sparked outraged against police brutality across the United States and beyond. On Thursday, people in the city of Dallas took to the streets to protest against the killings. According to eyewitnesses, it was around when protesters have begun to disperse to their homes that the shootings occurred. The shootings occurred around the Main Street of the city near El Centro College.

It said the suspects fired at police officers from elevated positions in a parking garage overlooking the street. Five officers died, while six others sustained injuries. Those injured are currently in hospital receiving treatment. Three suspects are said to be in police custody. As of writing, one suspect remained in a stand-off with police in the parking garage. Local media said a fourth suspect has died, but that has not been confirmed by the police. Some unnamed city officials told reporters that those three in custody are not cooperating with the police to give information about their motives.

The Dallas Morning News identified one of the dead officers as Brent Thompson. The Dallas police also confirmed that Thompson has been killed. Thompson, 43, is said to be an officer with the Dallas Area Rapid Transit force. The other four dead officers are yet to be named.

Before the visit to the hospital, Mayor Rawlings said at a news conference that the city is mourning the officers who lost their lives. He assured residents that the police force has gotten the situation under control, and that the White House had offered assistance to the city.

The Federal Aviation Authority has issued a statement restricting flights over Dallas. The agency said only relief aircraft operations under direction of Dallas Police Department are authorized in the airspace of the city.

It has been a devastating night. We are sad to report a fifth officer has died.

A mother of four who attended the protest with her children, and her sister identified as Shetamia Taylor, was shot in the leg. Her sister who was lucky to escape unhurt described they horror they witnessed during the sudden attack.

She told a local television channel in the city: “As the rally was ending and they turned to leave, they were one of the first crowds to leave, they heard the first gunshot. After that first gunshot she heard the second gunshot and after that it was just a lot of gunshots. She said they just came so fast and they wouldn’t stop. They all began to run, scatter and she said as she started to run she caught a bullet in the back of her right leg. She immediately jumped on top of one of her boys, the 15-year-old, she jumped on top to cover him on the ground as she pushed him in between two cars and the kerb.”

One of the organizers of the protest, Reverend Jeff Hood also said he watched people scramble for cover as gunfire rang out from an unknown direction.

May God protect our fallen heroes and bring peace upon the City of Dallas. https://t.co/TxvpcIbKyj

Senator of Texas, Ted Cruz prayed on Twitter for the dead, urging for calm in the city. The White House said President Barack Obama has been fully briefed on the incident.

Mr Obama is currently in Poland for the North Atlantic Treaty Organization summit. Speaking from the capital Warsaw, Obama once again criticized the availability of dangerous automatic weapons to members of the public. He repeated that it is time the country took a strong action on gun laws to curb the availability of dangerous weapons to civilians. Obama said: “We also know that when people are armed with powerful weapons it makes attacks like these more deadly, more tragic. And in the days ahead we are going to have to consider those realities as well.” Observers say the attack in the city will put the city’s police force in difficult position. The Dallas Morning News reports that since October, 195 officers have left the Dallas Police Department. It is said many of those have retired, but more than 50 officers left to work at other police agencies. The paper also adds that in recent months, many officers have been working overtime, and non-patrol officers have filled patrol shifts to respond to calls.

We are monitoring the situation for updates.

This article (Dallas Shootings: Snipers Kill Five Police Officers, Six Others Injured) is a free and open source. You have permission to republish this article under a Creative Commons license with attribution to the author and AnonHQ.com