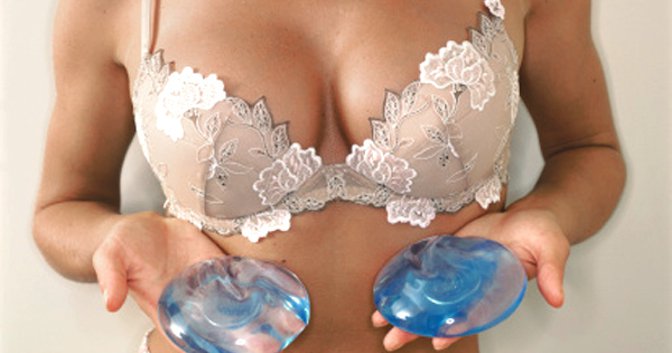 Should you get breast implants? If you are aware of the risks and potential complications of breast augmentation, this question won’t ever pop into your mind again.

Breast Implants Are NOT Safe

Although the US FDA approves two types of breast implants for sale in the United States — saline-filled and silicone gel-filled, it also accepts and warns there are risks associated with all breast implants. These include additional surgeries, capsular contracture—scar tissue that squeezes the implant, breast pain, rupture (tears or holes in the shell) with deflation of saline-filled implants, and silent (without symptoms) rupture of silicone gel-filled implants.

Studies conducted by implant manufacturers found that within three years, approximately three out of four reconstruction (breast cancer) patients and almost half of first-time augmentation patients, using either saline implants or silicone gel implants, experienced at least one local complication: pain, infection, hardening, or the need for additional surgery.

FDA has identified a possible association between breast implants and the development of anaplastic large cell lymphoma (ALCL), a rare type of non-Hodgkin’s lymphoma. Women who have breast implants may have a very small but increased risk of developing ALCL in the fluid or scar tissue surrounding the implant. Like other lymphomas, ALCL is a cancer of the immune system and not of breast tissue.

Though they are not directly linked to breast cancer, implants interfere with detecting the life-threatening disease. Breast implants rupture during mammography, because of which, women with augmentation tend to forgo mammograms; thereby delaying cancer diagnosis.

The FDA recommends routine MRI scans to detect silent ruptures in silicone breast implants — starting three years after the implants are inserted, to be repeated every two years after that.  Gretchen Burns, a nurse consultant at FDA’s Center for Devices and Radiological Health, says:

“The life of these devices varies according to the individual. All women with implants will face additional surgeries—no one can tell them when. While a few women have kept their original implants for 20-30 years, that is not the common experience.”

Almost half of all women who opt for silicone breast implants, will experience a rupture within 6-10 years. 60% of women with saline breast implants will have complications within 4 years, and 1 out of 5 will require additional surgery within three years.  A 2000 Institute of Medicine report found rupture rates as high as 77%.

In 2015, a Florida woman claimed she almost died when one of her breast implants became filled with mold, while the other one ruptured. She told Daily Mail Online:

“I had no clue what implants were made of. Had I known, I never would have stuck them in my body. My breastfeeding caused my kids to be ill. My son, at 19 months old, had a severe kidney infection. He almost died.”

According to the National Research Center for Women and Families, a Washington, DC-based health research organization, the following are some of the known mishaps that you can expect from a breast surgery:

When you sign up to have breast implants, they must be changed every 8-10 years so that they remain in the “best and safest” condition.  In some cases the surgery to remove breast implants can be like a mastectomy, complete removal of the breast tissue and sometimes the muscle underneath. Don’t forget the financial burden, and increased health insurance costs that go with multiple surgeries and potential medical complications.

If the above facts didn’t move you — away from breast implants — this might:

In 1994, multiple world leading manufacturers of silicone implants, paid millions to those injured. Dow Corning agreed to pay $2.018 billion, Bristol-Myers Squibb $1.154 billion and Baxter Healthcare $555 million to more than 25,000 women who were injured by silicone breast implants. According to a whistleblower, staff at Dow Corning knew for a very long time that their implants were toxic, greasy, and had a high leakage rate; yet covered it up for as long as they could.

What was inside the Dow Silicone implants? Some horrific chemicals like: The FDA approves breast implants for increasing breast size in women, for reconstruction after breast cancer surgery or trauma, to correct developmental defects, and to correct or improve the result of a previous surgery — you can see which one is a misfit among the four.

Instead of asking ‘should you get breast implants?’ you’ve got to ask yourself, ‘is it really worth all that money, pain, and possible risks to your health?’

This article (8 Frightening Reasons not to get a Boob Job) is a free and open source. You have permission to republish this article under a Creative Commons license with attribution to the author and AnonHQ.com.