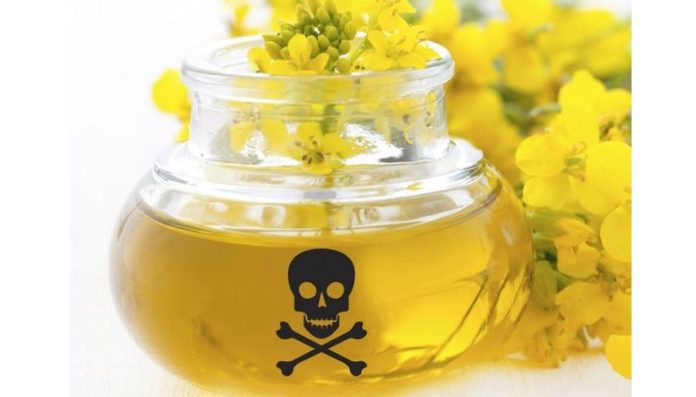 A new study, conducted by Lewis Katz School of Medicine at Temple University (LKSOM) in Philadelphia, suggests the low-fat ‘healthy’ canola oil worsens memory loss and learning ability in Alzheimer’s patients, increases the build-up of plaques in the brain, causes weight gain, and is detrimental to brain health.

Senior investigator Dr Domenico Praticò, director of the Alzheimer’s Center at LKSOM, warned that it is a big mistake to consider the trendy kitchen staple a healthy oil or to place it on the same level as oils that have proven benefits for your health:

“Canola oil is appealing because it is less expensive than other vegetable oils, and it is advertised as being healthy. Very few studies, however, have examined that claim, especially in terms of the brain.

“Even though canola oil is a vegetable oil, we need to be careful before we say that it is healthy. Based on the evidence from this study, canola oil should not be thought of as being equivalent to oils with proven health benefits.”

In the study, researchers used an animal model that mimics Alzheimer’s in humans as it progresses from the asymptomatic early stages to the full-blown disease. The mice were placed into two groups when they were six months old. The first group consumed a normal diet while the second received a normal diet along with the equivalent of two tablespoons of canola oil per day.

A year later when the animals were assessed, it was found that those who ate the diet rich in canola oil had gained significant weight. When their brains were examined, it showed they also had working memory impairments.

The researchers then examined their brain tissue. The mice who ate canola oil had far lower levels of a peptide that protects neurons from damage known as amyloid beta 1-40; had higher amounts of amyloid plaques in their brains; and had a significant reduction in the number of contacts between their neurons, which is a sign of extensive injury.

“Like olive oil, it is high in monounsaturated fat (63 percent). Canola oil also contains a significant level of polyunsaturated omega-3 fat (9-11 percent). In addition, canola oil contains significant amounts of phytosterols that reduce the absorption of cholesterol into the body.

“Most canola is chemically extracted using a solvent called hexane, and heat is often applied which can affect the stability of the oil’s molecules, turn it rancid, destroy the omega-3s in it, and can even create trans fats.”