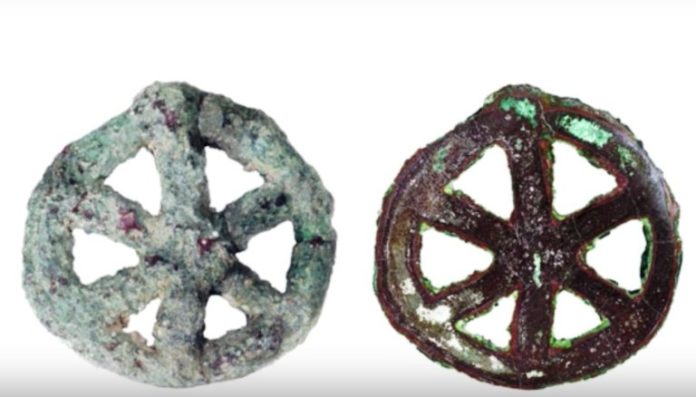 An old site in Pakistan’s largest province, full of conquest and historical detail – talks about a discovery of an old amulet that was discovered at the archaeological site of Mehrgrah. This one of a kind discovery reveals many secrets, with its technology of creating different metallic objects being used today, especially by NASA.

According to experts, this wheel-like shaped amulet is one of the first objects ever to be made from a wax casting method that is still being used today.  The not so perfectly round object was discovered by Jean Jarrige, a French archaeologist and one of the few people to have discovered archaeological sites in Pakistan. However, this discovery didn’t make it the papers until recently, when it was further examined, using the latest technology.

Using the latest techniques in lighting and photography, scientists observed that the light bounces back from this small 2 centimetre amulet. The findings are consistent with the amulet being made from a single piece and that it consists of no soldering parts – not even the joints in the circle. Furthermore, by observing the light reflecting from the amulet, scientists also discovered that the amulet was made purely from copper that was melted at around a thousand-degree centigrade.

The Technology that NASA still Uses

This lost method – that was used by the people of Mehrgrah to mould the metal into a desired shape – was in a way, unique and very simple. According to the experts, they first made a copy of the object with a substance that could melt easily. Then they formed a mould using clay, which was then baked to create a hard template. Once done, the people of Mehrgrah would pour the hot metal into the enclosed baked clay, which would melt the wax and fill the space, resulting in a one-piece metal object – something quite advanced for a 6000-year-old civilisation.

However, this method is still being used today – to make specific metallic objects such as small pieces of space craft, air craft, and even jewellery.

According to NASA, the same method was used by them to create special parts of the Messenger space probe – which is not orbiting space. Furthermore, this same method is used by NASA to build customised parts for the International Space Station.

More than Just a Civilisation of Metal Advancements

However, the experts who researched the area of Pakistan where this was discovered, also state that it is one of the first few discoveries to reveal a major advancement in metallurgy, and a simple, yet unique method of wax casting. The experts also concluded that this same method might have been adopted by later civilisations, such as Iraq and its surrounding areas.

According to the experts, Pakistan was not only the place known for metallurgy, but other innovative advancements have also been discovered. Tools and objects for the first dentistry practice were found there, and cotton was weaved for the first time in Mehrgrah.

Scientists discovered that early men used a small hand-held drill to bore teeth more than 5000 years ago, and the experts digging the site in Pakistan found many drilled teeth resting in the graveyard of the archaeological site.

The scientists also discovered many cotton threads that were preserved by natural mineralisation created by the environment; also, the people there preserved some of the cotton threats using copper beads, which were further analysed showing that Mehrgrah was also advanced in textile making, something for which Pakistan can be proud of its heritage.

This article (A 6,000 Year Old Amulet is the Oldest Example of a Technology that is Still Being Used by NASA) is free and open source. You have permission to republish this article under a Creative Commons license with attribution to the author and AnonHQ.com.