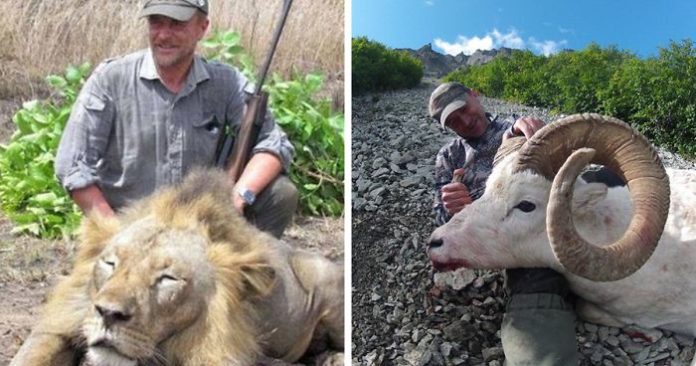 A big game hunter, who posted photos of himself posing with a dead lion, has died after falling into a ravine while shooting wild birds. Luciano Ponzetto, a 55-year-old veterinarian, sparked worldwide fury after sharing the photos on social media.

The vet had also posted a number of images of his posing with his other trophy hunts, including a leopard, lions, rams, boars and a baby elephant on his Facebook and Instagram accounts. Ponzetto, who had faced criticism online and in the media, also received hate mail and a number of death threats after sharing the images on social media last year.

In the wake of the onslaught of disapproval and hate, Ponzetto was forced to step down as the medical director of a kennel business and close his social media accounts. Despite the controversy surrounding the images, Ponzetto defended himself, saying: “I know that I have done nothing wrong.

“I will carry on hunting until the law changes.”

Luciano Ponzetto had been hunting with friends when he slipped on ice and fell down the ravine at Colle delle Oche, in the hills above the Italian city, Turin, according to officials.

An Italian police spokesman told The Sun: “We were called by the mountain rescue services who had been alerted to the incident by someone who was out with him.

“His body was recovered by helicopter and taken to a local hospital.

“It looks like he slipped and fell when he was out hunting.

“He died instantly and there was nothing that could be done.”

Last year, Texas-born hunter Ian Gibson, 55, was trampled to death by a baby elephant in Zimbabwe after attempting to measure its ivory tusks for an American client. Shortly after Gibson’s death was announced, animal rights supporters took to social media saying that he ‘got what he deserved’.

Every year, trophy hunters kill thousands of wild animals in foreign countries, primarily in Africa. Many of these animals are either vulnerable or endangered species, with trophy hunters paying big bucks to gain the opportunity to shoot these breathtaking animals.

While big game hunters often defend the practice by calling it a sport, the majority of the weapons used today have been proven to be both accurate and effective in a child’s hands. This fact, ultimately, invalidates this argument, as a sport requires skill and effort in order to overcome the challenge.

This article (Vet Trophy Hunter Dies After Falling Down Ravine During Hunting Trip) is a free and open source. You have permission to republish this article under a Creative Commons license with attribution to the author and AnonHQ.com.