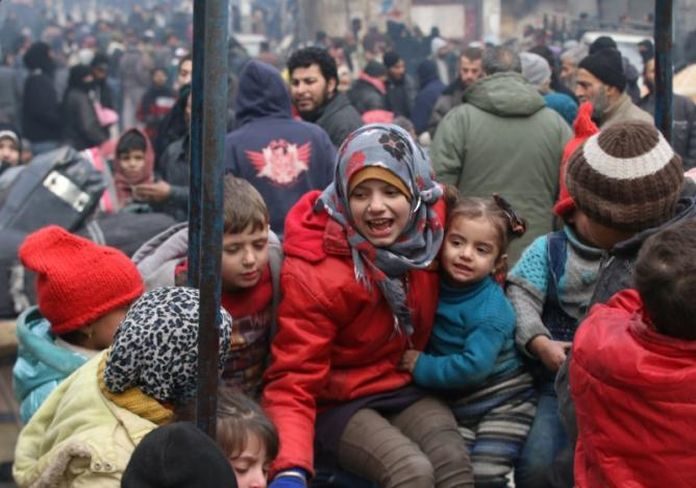 If you scroll through your Facebook News Feed or Twitter Trends these days, you would come to know about Bana Al-Abed, a 7-year-old Syrian girl who (along with her mother Fatemah) is live tweeting her daily struggles living in war-hit Aleppo and seeking help over the past few weeks.

Share this message to whole world. #Aleppo ceasefire broke, civilians are in danger. I beg world u do something now to get us out. – Fatemah

Final message – I am very sad no one is helping us in this world, no one is evacuating me & my daughter. Goodbye.- Fatemah #Aleppo

Or if you go to Google News and search Aleppo, you would find headlines like:

“Aleppo is a place where the children have stopped crying.” Scenes of sheer terror and grief in the last hospital in the last days of Aleppo pic.twitter.com/sy1NgjD4gY

Battle for #Aleppo: Final goodbyes from a city under siege in #Syriahttps://t.co/EuG4vHsQzl pic.twitter.com/FL3nCCreL5

However, what you would not find is the truth:  That what is being reported in the western mainstream media is a propaganda-driven last ditch effort to convince a largely ignorant populace that the Assad regime and Russia, and not the rebels, (funded by the West, Saudi Arabia, Jordan, Israel, Qatar, and Turkey) are behind the ‘unthinkable atrocities’ (some going so far as to call it a genocide) civilians suffer in Aleppo.

Canadian journalist and human rights activist, Eva Bartlett, who has been to Syria four times since April 2014, blasted the western mainstream media’s coverage of the Syrian war in an emotional speech at a UN press conference arranged by the Syrian mission to the United Nations.

The corporate media narrative, she argued, is meant to mislead the unsuspecting American and European public about what is really happening in Syria; by demonizing President Bashar Assad’s government and altering the facts on Russia’s support for Damascus:

“I’ve been many times to Homs, to Maaloula, to Latakia and Tartus [in Syria] and again, Aleppo, four times. And people’s support of their government is absolutely true. Whatever you hear in the corporate media is completely opposite. And, on that note, what you hear in the corporate media, and I will name them – BBC, Guardian, the New York Times etc. – on Aleppo is also the opposite of reality.

“As for the agenda of some corporate media: it is the agenda of regime change. How can The New York Times or Democracy Now maintain until this day that this is a civil war in Syria? How can they maintain that the protests were unarmed and nonviolent until, say, 2012? That’s absolutely not true. How can they maintain that the Syrian government is attacking civilians in Aleppo when every person that’s coming out of the areas occupied by terrorists is saying the opposite?”

When she asked a reporter from Aftenposten, Norway’s largest newspaper, who challenged her claims that the western media was lying, to name one international humanitarian organization operating in Eastern Aleppo, he didn’t have an answer. To which, Bartlett pointed out:

“There are none. These organizations are relying on the Syrian Observatory for Human Rights [SOHR], which is based in Coventry, UK, which is one man. They’re relying on compromised groups like the White Helmets. Let’s talk about the White Helmets. The organization receives its funding from Western states with their own interests in Syria such as the U.S. and the U.K. They purport to be rescuing civilians in Eastern Aleppo and Idlib, [Yet] no one in Eastern Aleppo has heard of them.

“The White Helmets purport to be neutral, and yet they can be found carrying guns and standing on the dead bodies of Syrian soldiers. Their video footage actually contains children that have been ‘recycled’ in different reports; so you can find a girl named Aya who turns up in a report in say August, and she turns up in the next month in two different locations.

This article (There’s No Genocide in Aleppo: Canadian Activist Exposes Western Media Lies) is free and open source. You have permission to republish this article under a Creative Commons license with attribution to the author and AnonHQ.com.