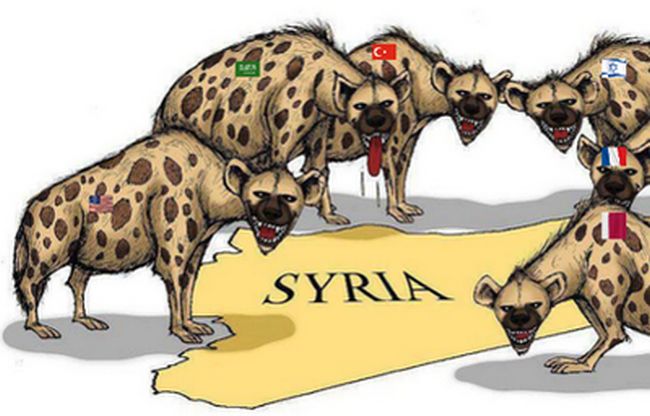 The United Nations, the United States, the West in general, and the mainstream media in particular, have little interest in hearing what Dr Bashar al-Ja’afari, Syria’s Ambassador to the UN, has to say. In fact, they actively work to silence him or twist his words with the obvious intent of distorting reality and prolonging the proxy war on Syria.

Recently, when the Schiller Institute hosted a conference in midtown Manhattan, on the eve of both the 15th anniversary of the 9/11 attacks and the convening of the United Nations General Assembly, the Permanent Representative of the Syrian Arab Republic to the UN dared to call out Saudi Arabia, Turkey, the United Kingdom, and the United States for their role in funding and training terrorists in Syria. He also dared to call them out, as well as the UN, for being used as a vehicle for the West to justify their illegal airstrikes and military intervention in Syria. Neither his extraordinary speech nor his astounding revelations found any mention anywhere.

Since there is evidence of lies and truths that the United States doesn’t want you to know about – its association with the Islamic State and its continuous attempts to defame the reputation of Syria – it is imperative that Ambassador al-Ja’afari is heard loud and clear. Watch him expose the Western lies and share it if you think it can ruffle some feathers and make an impact…

In case the video is blocked for obvious reasons, here are some of the outrageous claims made by al-Ja’afari in his 50-minute long address…

Most of us in this world believed after that black day of 9/11, that there would be a united international stand against terrorism. We were all optimistic at that time, if you remember, that finally, we will get together to fight terrorists. And that all nations will fight together against terrorists, their supporters, their funders, and their inspirational leaders. Unfortunately, what happened next was the invasion of Iraq.

So if the Saudis attacked New York, the Twin Towers, why go after Iraq, if the main reason was to avenge what happened in 9/11 — and we all know, and we all knew at that time, that it was a Saudi conspiracy. Then why attack Iraq? Iraq is a secular country, like Syria. Syria, Iraq, and Algeria are the only three secular governments in the Arab world! Iraq is out the picture now; Iraq has become a hub of international terrorism, after the spreading of George Bush freedom over there.

Algeria you know. Algeria was tested before us, in the early 1990s. They sent to them an early Arab spring, but it was defeated — thank God! So, only Syria remains. This unprecedented barbarian war reflects the bitter fact that terrorism is still being privileged with safe havens, money resources, some well-known government support, and the growth of terrorist ideologies and shelters around the world. The Syrian people suffer, until this moment, from terrorism which is supported by regimes of well-known countries, such as Qatar, Turkey, France, and Saudi Arabia’s Wahhabi family.

This terrorist war against Syria is accompanied by policies of Western states — led by the United States administration and Britain — based on violating international law and the Charter of the United Nations, disrespecting the sovereignty of the country, and acting against the will and interests of the Syrian people.

9/11 and the geo-political terrorism

Too many people, too many ambassadors to the United Nations, come to me and say, “You know, Bashar, you are right. Your government is right. We know the truth, but we cannot say it. You can — God bless you — but we cannot say it.” So the mask has fallen. The truth is there. If you dig a little bit, you will find scandals that take place at the United Nations — scandals. It’s not a place to maintain peace and security; it is a place to demolish peace and security, to destabilize societies. It’s very easy, very easy at the United Nations, to destroy a country.

This article (SHOCKING: Syria’s UN Envoy Reveals How the West Breeds Terrorists, Destroys Countries) is a free and open source. You have permission to republish this article under a Creative Commons license with attribution to the author and AnonHQ.com.