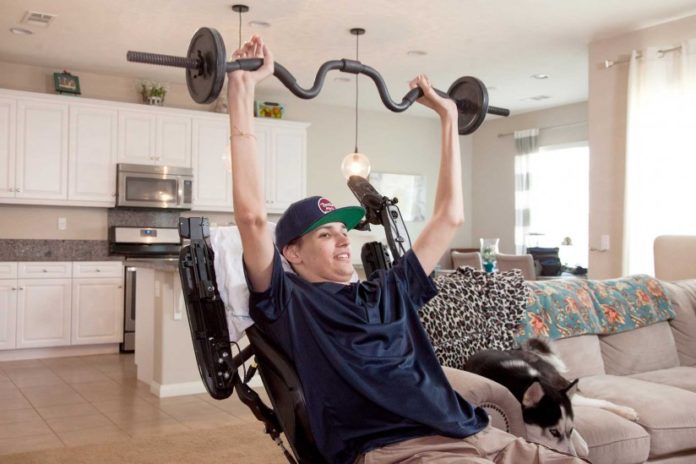 For the first time ever, a team of doctors at Keck Medical Center of the University of Southern California have restored arm and hand functions to a quadriplegic, using an experimental stem cell therapy.

In March 2016, 21-year-old Kristopher Boesen suffered severe traumatic injury to his cervical spine, leaving him paralyzed from the neck down. The trauma, caused by a freak car accident, also left him dependent on a ventilator. Doctors treating him at Rancho Los Amigos National Rehabilitation Center (which is collaborating with the Keck Medical Center of USC), at the time, warned him that he might never regain the use of his limbs.

However, they also told him that he fit the criteria to participate in the Asterias SCIStar trial, led by Dr. Edward D. Wirth III, chief medical officer of Asterias Biotherapeutics. This trial could repair some of the damage, and help him regain use of his arms and hands.

According to Asterias Biotherapeutics, the developer of the AST-OPC1 preclinical trials of the agent in models of spinal cord injury have shown it leads to a “reduction of the size of the injury cavity, restoration of the protective ‘myelin’ coating on nerve cells, production of factors that stimulate nerve cell growth, and recruitment of blood vessels to deliver oxygen and nutrients to the site”. Two weeks after surgery, Boesen began to show signs of improvement; and three months later, he was able to feed himself, use his cell phone, write his name, operate a motorized wheelchair and hug his friends and family. Improved sensation and movement in both arms and hands also made it easier for Boesen to care for himself more independently. Dr Liu explained:

“As of 90 days post-treatment, Kris has gained significant improvement in his motor function, up to two spinal cord levels. In Kris’ case, two spinal cord levels means the difference between using your hands to brush your teeth, operate a computer or do other things you wouldn’t otherwise be able to do, so having this level of functional independence cannot be overstated.”

Boesen’s parents are grateful to doctors for enabling their son to participate in the study and help him regain his upper body movement. Boesen’s father said:

“So many things had to happen, and there were so many things that could have put up a roadblock. The people at Keck Medical Center of USC and elsewhere moved heaven and earth to get things done. There was never a moment through all of this when we didn’t think our son was getting world-class care.”

Asterias, which recently got FDA approval to administer 20 million cells in the next batch of patients, presented a data update on the trial in September, at the International Spinal Cord Society meeting in Vienna, including the results from Boesen. Dr Edward remarked:

While Boesen can look forward to detailed assessments after 180 days, 270 days and one year, doctors are careful not to predict his future progress, yet they hope AST-OPC1 will continue to improve quality of life for patients with spinal cord injury. According to the National Spinal Cord Injury Statistical Center, there are approximately 17,000 new cases of spinal cord injury in the United States each year.  Dr Liu stated:

“Typically, spinal cord injury patients undergo surgery that stabilizes the spine but generally does very little to restore motor or sensory function. With this study, we are testing a procedure that may improve neurological function, which could mean the difference between being permanently paralyzed and being able to use one’s arms and hands. Restoring that level of function could significantly improve the daily lives of patients with severe spinal injuries.”

Nonetheless, Boesen, who has a passion for fixing up and driving sports cars and was studying to become a life insurance broker at the time of the accident, is looking forward to a bright future:

“All I’ve wanted from the beginning was a fighting chance. But if there’s a chance for me to walk again, then heck yeah! I want to do anything possible to do that.”

This article (Breakthrough: Californian Neuroscientists’ Experimental Stem Cell Therapy Restores Quadriplegic Man’s Arm, Hand Movement) is a free and open source. You have permission to republish this article under a Creative Commons license with attribution to the author and AnonHQ.com.