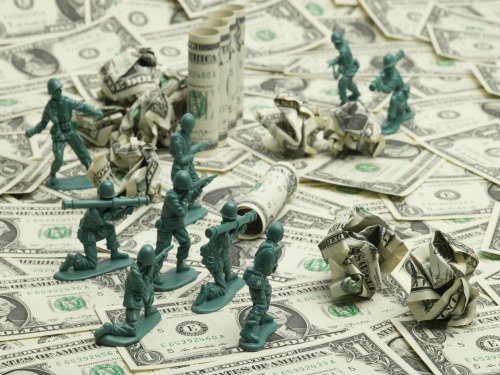 Jay Syrmopoulos of The Free Thought Project recently brought to attention the fact that the money spent on war in 2015 could have bought each homeless person in America a $1 million house. We thought it would be interesting to see what else we could accomplish with the money that’s feeding the military-industrial-complex and have compiled a short list below.

In 2015, $596 billion was spent by the U.S. on military expenditures. This is more than China, Saudi Arabia, Russia, U.K., India, and France combined. To put it into context:

Every Homeless Person in America Could Have a $1 Million Home

Let’s start off with Syrmopoulos’s findings. While it’s safe to say homeless individuals would not be provided “million-dollar” homes even if it were possible, the point to take away from this is that with the money spent on war, they theoretically could be. In January of 2015, the U.S. Department of Housing and Urban Development, or HUD, reported that there were 564,708 homeless people in the States on any given night. This means every one of those homeless citizens could have their own million-dollar house, and there would still be money left over.

According to Politifact, more than 46 million Americans are living in poverty, and in other reports, “good health care” for an American costs an average of $8,233 per person, per year. The truth about Medicaid (health care assistance for low-income citizens) is that people are not receiving the proper care they require

Due to lowered payment rates, recipients often have a hard time finding a doctor that will accept them, forcing many to rely on overcrowded ER’s and non-emergency care. Patients frequently receive inferior care, are assigned to surgeons with less skill, receive the poorest post-operative instructions, and more often than not, Medicaid patients suffer worse outcomes from procedures identical to those performed on patients with actual health insurance, or no insurance at all.

Another major issue with medical care in America is that, like everything else, it’s become an industry whose first priority is in profits. Even with current costs, however, the money spent on war could ensure all Americans have access to high-quality medical care.

College Could Be Tuition Free

According to various reports, around $60 billion is spent on college tuition per year—that’s a mere 10% of what goes to the military-industrial-complex. As of right now, colleges in the States could be tuition free, and the U.S. government would still have enough left over to be the top military-spender. Imagine how fast we would advance, and what we could accomplish in the future, if all Americans had access to a higher education.

World Hunger Could Be Eradicated

According to reports from 2013, the United Nations estimated it would cost $30 billion a year to end world hunger. This is literally only 5% of what the U.S. spends a year on war. The United States could win the admiration of the entire world by improving the lives of humans everywhere, but instead the legacy we are leaving behind is one of death and destruction.

So there it is; just a few of the many things our hard-earned tax dollars could be utilized for other than war. There’s going to come a day when citizens will have to decide if sacrificing our health and happiness is worth it all.

This Article (What Could We Accomplish if We Stopped Spending Our Money on War?) is a free and open source. You have permission to republish this article under a Creative Commons license with attribution to the author and AnonHQ.com.