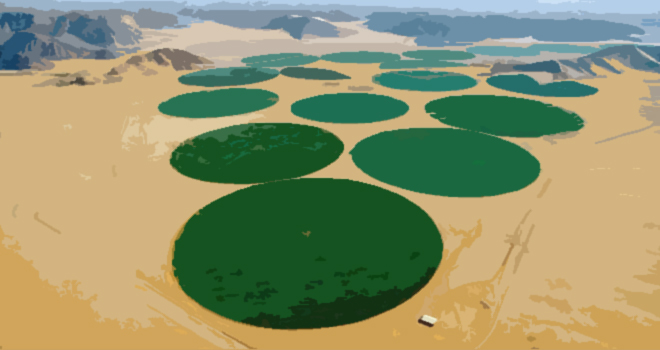 Colonel Gaddafi, a man of many visions, had dreamed of seeing an abundance of fresh water in Libya, and wanted to make his home country stand as a proud and free nation. In 1953, the quest for black gold in the vast deserts that reside in the southern part of Libya, led to the discovery of oil and fossil water. The quadruple aged water aquifers that were uncovered in the 50s had projected sizes varying from 4,500 to 20,000 cubic kilometers. The majority of this water supply was accumulated almost 15,000 to 25,000 years ago, while some water tanks are believed to be a few thousand-years-old.

After a hardcore battle between Gaddafi and Muhammad Idris bin Muhammad al-Mahdi as-Senussi, King of Libya, Gaddafi and his army acquired power in a coup against Muhammad Idris in 1969. The new government, also called the Libyan Arab Jamahiriya, made the oil companies state owned and invested a great deal of the oil profits to funnel the flow of drinking water from the underground aquifers, by installing a large number of bore wells throughout the Libyan land. Big farms were created in a southern region of Libya to motivate men and women to relocate to the desert and farm in those places. However, a lot of people in Libya preferred living in the northern and coastal parts of the country, for there was a steady and ample supply of water there.

This backfire made Gaddafi’s government create a new plan: bring the water to the people. The Jamahiriya administration carried out the preliminary feasibility reports in 1974. In 1983, the wheels for the Great Man-Made River project were set to roll. The Great Man-Made River Project, a Jamahiriya government financed venture, was going to be developed in five stages. All five stages were a completely different project by themselves, however, when combined, the stages would form an integrated set-up.

As water in the newly formed Libya was considered to be a human right for its people, Gaddafi had to make this happen for the happiness of his people.

In addition, on the opening day of the second phase of the Man-Made River Project, Gaddafi stated that this project is the greatest response to the United States of America, and to all those who link Libya with the terrorists or any such activity. This project sheds light on the fact that Libya is all about peace and progress.

The Involvement of NATO

In 2011, NATO forces attacked Libya, and during that time, the third phase of the project was also completed.

However, the first phase was officially launched at the end of 1991, supplying more than a million cubic meters of fresh water every day from a pipeline that stretches more than 1000 km, from Sirte to Benghazi. The second phase supplies one million cubic meters of underground water each day to the coastal belt of the country, as well as supplying water to Tripoli. And finally, the third phase offers the organized development of the first phase set-up, and provides Tobruk and other cities close to the coastline with a new underground water supply.

The network of concrete pipes, which each have a diameter of 4 meters each, stretch more than 3500 kilometers. These pipes are hidden beneath the wilderness of the desert to stop vaporization of the water. There are more than 1000 wells, countless sections of concrete pipes, and 250 million cubic meters of excavation. Everything for the project was made in Libya; nothing was exported.

Furthermore, the final two stages of the man-made river required stretching the supply system collectively – which, once achieved, would irrigate more than 100,000 hectares of terrain. Or, as Gaddafi described, the venture would make the country as green as the flag of the Libyan Arab Jamahiriya.

Also, because of its international recognition, many people from other nations were employed in Libya, especially in the Great Man-Made River Project, for many years. But following the start of NATO’s ‘humanitarian’ bombardment of Libya, the summers of 2011 became a cause for a large number of foreign employees to leave the country.

In July 2011, the North Atlantic Treaty Organization not only bombed the Great Man-Made River water system and pipelines near Brega, but additionally eradicated the plant that created the concrete pipes that were used as replacements during repairs. They justified their actions by claiming that the pipeline factory was used as a warehouse for the military.

Additionally, they also said that the same pipeline manufacture plant was used as a launch site for missiles and rockets. When NATO forces bombed that pipe building plant, more than five security officers were wiped out, along with the water supply system that supplied the general public with water for personal consumption and agricultural purposes – hitting Libya’s essential infrastructure.

The development of the final two stages of the river project were set to be finished within the next 20 years, but thanks to NATO’s ‘humanitarian’ war on Libya, the projects’ future is in great peril.

The Fight For Water

Clean, sparkling water – much like the water made available to the Libyans by the Great Man-Made River – is not only a vital source for humans, but all living things. With no drinkable water, we just cannot perform.

At the moment, more than 39% of the human population has very little or no access to safe, healthy and clean water – a number which is likely to leap up to 50% within just a few years. And as per the United Nations Development Program, worldwide intake of water is increasing every 20 years. While at the same time, after every 365 days, the majority of the great deserts in the world are growing wider, and the volume of functional farming terrain is shrinking in size.

However, there is more to the NATO ‘humanitarian’ bombardments of the Great Man-Made River Projects. In 2007, the United Nations Environment Program mentioned the water for revenue program, which earnestly encourages water to be a privately owned business. And, on the other hand, the World Bank implemented a strategy for privatizing water.

“The wars of the twenty-first century will be fought over water,” says Ismail Serageldin, the founding director of Bibliotheca Alexandrina and a former director of the World Bank.

In application, this means that both the World Bank and the United Nations want to fasten the water sources, allowing them to be used as a means of power. And once they entirely regulate these means, those means become financial assets, only to be sold back to the ‘free’ countries with a price tag. And, naturally, the prices for the freely available product will increase as the demand increases and water supplies are reduced.

In Libya’s case, the bombardment on the water supply system created a ‘problem’. Subsequently, a ‘reaction’ in the form of an instantaneous prevailing need, was triggered. More than 60% of the country’s people depended on the Great Man-Made River water supply for personal and commercial use. However, a few days after the demolition of the Great Man-Made River, over 50% of Libya had no running water. Finally, an established ‘solution’ was enforced – make the people of the war-torn nation reliant on a single water source – and consequently bound the people to their new ‘democratic’ government.

This Article (The Great Man-Made River of Gaddafi: What Happened To It?) is free and open source. You have permission to republish this article under a Creative Commons license with attribution to the author and AnonHQ.com.