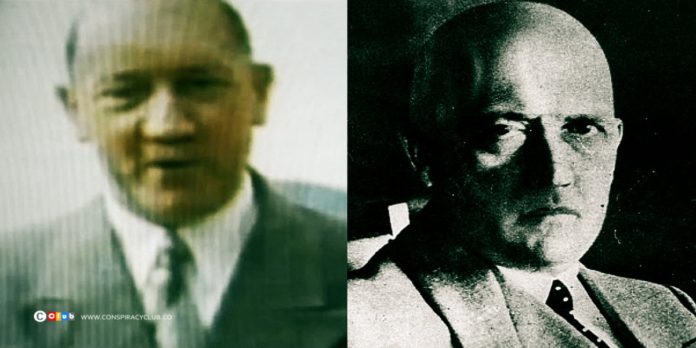 The FBI.gov website reveals the government knew Hitler was alive and well, and living in the Andes Mountains long after World War II had ended.

The world has been told for the last 70 years that on April 30 1945, Adolf Hitler committed suicide in his underground bunker. His body was discovered and identified by the Soviets before being taken back to Russia. Is it possible that the Soviets lied all this time, and that history was rewritten?

With the release of these FBI documents, it certainly seems that the most notorious leader in history escaped Germany and lived a peaceful life in the foothills of the Andes Mountains in South America. And as if that news wasn’t bizarre enough, a photo has emerged recently which purports to show an elderly 95-year-old Hitler posing with his girlfriend in Brazil in 1984.

Recently released FBI documents are beginning to show that not only was Hitler and Eva Braun’s suicide faked, the infamous pair might have had help from the director of the OSS himself, Allen Dulles.

In one FBI document from Los Angles, it is revealed that the agency was well aware of a mysterious submarine making its way up the Argentinian coast dropping off high level Nazi officials. What is even more astonishing is the fact that the FBI knew he was in fact living in the foothills of the Andes.

Who is the Mysterious Informant?

In a Los Angeles letter to the Bureau in August of 1945, an unidentified informant agreed to exchange information for political asylum. What he told agents was stunning.

The informant not only knew Hitler was in Argentina, he was one of the confirmed four men who had met the German submarine. Apparently, two submarines had landed on the Argentinian coast, and Hitler with Eva Braun was on board the second.

The Argentinian government not only welcomed the former German dictator, but also aided in his hiding. The informant went on to not only give detailed directions to the villages that Hitler and his party had passed through, but also credible physical details concerning Hitler.

While for obvious reasons the informant is never named in the FBI papers, he was credible enough to be believed by some agents.

Even with a detailed physical description and directions the FBI still did not follow up on these new leads. Even with evidence placing the German sub U-530 on the Argentinian coast shortly before finally surrounding, and plenty of eye witness accounts of German official being dropped off, no one investigated.

Even More Evidence is Found:

Along with the FBI documents detailing an eye witness account of Hitler’s whereabouts in Argentina, more evidence is coming to light to help prove that Adolf Hitler and Eva Braun did not die in that bunker.

In 1945, the Naval Attaché in Buenos Aires informed Washington there was a high probability that Hitler and Eva Braun had just arrived in Argentina. This coincides with the sightings of the submarine U-530. Added proof comes in the form of newspaper articles detailing the construction of a Bavarian styled mansion in the foothills of the Andes Mountains.

Further proof comes in the form of architect Alejandro Bustillo who wrote about his design and construction of Hitler’s new home which was financed by earlier wealthy German immigrants.

Perhaps the most damming evidence that Hitler did survive the fall of Germany lies in Russia. With the Soviet occupation of Germany, Hitler’s supposed remains were quickly hidden and sent off to Russia, never to be seen again. That is until 2009, when an archeologist from Connecticut State, Nicholas Bellatoni was allowed to perform DNA testing on one of the skull fragments recovered.

What he discovered set off a reaction through the intelligence and scholarly communities. Not only did the DNA not match any recorded samples thought to be Hitler’s, they did not match Eva Braun’s familiar DNA either. So the question is, what did the Soviets discover in the bunker, and where is Hitler?

It was not only General Eisenhower who was concerned over Hitler’s compete disappearance, Stalin also expressed his concerns. In 1945, the Stars and Stripes newspaper quoted then General Eisenhower as believing that the real possibility existed of Hitler living safely and comfortably in Argentina.

With all of the new found evidence coming to light, it is possible and even likely that not only did Hitler escape from Germany; he had the help of the international intelligence community. Released FBI documents prove that they were not only aware of Hitler’s presence in Argentina; they were also helping to cover it up.

It would not be the first time the OSS helped a high ranking Nazi official to escape punishment and capture. Look at the story of Adolf Eichmann who was located in Argentina in the 1960’s.

Did Hitler escape to Argentina? The answer is yes.