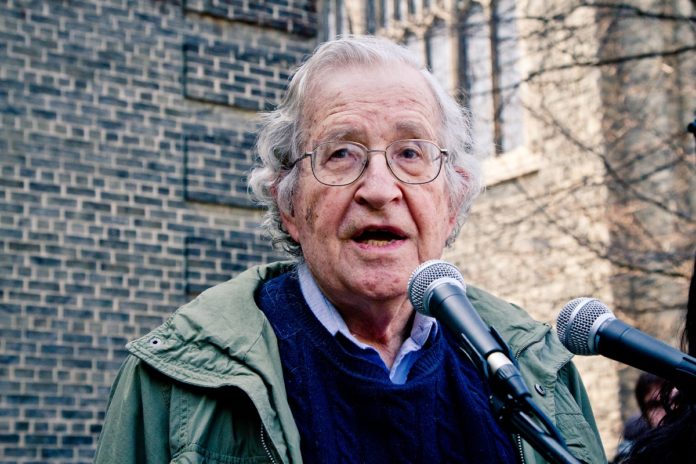 The MIT professor argues that Bernie Sanders’ detractors are ignoring history, as Presidents Eisenhower and Reagan enacted similar “radical” ideas.
Now that Ted Cruz has officially dropped out of the presidential race, the election is heating up for contenders and citizens of America. Will the next POTUS be Hillary Clinton, Donald Trump, or Bernie Sanders?

All are supported and loathed for unique reasons, but one, in particular, is catching gravity among the millennial generation: Bernie Sanders. Because the Vermont Senator seeks to expose the corruption in the government and make radical changes in the United States – such as offering free healthcare to all citizens, he has received support from people of all backgrounds – including celebrities, such as Dick Van Dyke,Mark Ruffalo, and Neil Young.

However, it’s Noam Chomsky’s endorsement that may be the most newsworthy. After attending a Sanders’ event last Tuesday, the MIT professor and author made candid observations about the presidential contender’s platform. Chomsky commented that those who view some of Sanders’ greatest ideas as “radical” ignore historical context. DemocracyNow relays that the respected political thinker called Sanders a “mainstream New Deal Democrat,” comparing him to former President Dwight Eisenhower. Reportedly, anyone who rejected FDR’s New Deal didn’t belong in the American political system.

“His proposal for a national healthcare system, meaning the kind of system that just about every other developed country has, at half the per capita cost of the United States and comparable or better outcomes, that’s considered very radical,” Chomsky said. “But it’s been the position of the majority of the American population for a long time.”

He also reminded the public that Ronald Reagan, a Republican icon, once signed a bill into law passed by a Democratic House and a Republican-controlled Senate. The law forced hospitals to provide emergency medical care to anyone at any time, even if that person was an undocumented immigrant.

The Centers for Medicare and Medicaid Services confirms:

“In 1986, Congress passed the Consolidated Omnibus Budget Reconciliation Act, which contained the Emergency Medical Treatment and Active Labor Act. The law requires hospitals to treat patients in need of emergency care regardless of their ability to pay, citizenship or even legal status. It applies to any hospital that takes Medicare funds, which is virtually every hospital in the country.”

Chomsky might still believe that “in our system of mainly bought elections, [Sanders] doesn’t have much of a chance,” but his attitude toward Sanders’ campaign seems more optimistic.

He finished his commentary by stating that Sanders has “mobilized a large number of young people who are saying, ‘Look, we’re not going to consent anymore.’ If that turns into a continuing, organized, mobilized force, that could change the country—maybe not for this election, but in the longer term.”

“Well, Bernie Sanders is an extremely interesting phenomenon. He’s a decent, honest person. That’s pretty unusual in the political system. Maybe there are two of them in the world, you know. But he’s considered radical and extremist, which is a pretty interesting characterization, because he’s basically a mainstream New Deal Democrat. His positions would not have surprised President Eisenhower, who said, in fact, that anyone who does not accept New Deal programs doesn’t belong in the American political system. That’s now considered very radical.

The other interesting aspect of Sanders’s positions is that they’re quite strongly supported by the general public, and have been for a long time. That’s true on taxes. It’s true on healthcare. So, take, say, healthcare. His proposal for a national healthcare system, meaning the kind of system that just about every other developed country has, at half the per capita cost of the United States and comparable or better outcomes, that’s considered very radical. But it’s been the position of the majority of the American population for a long time. So, you go back, say, to the Reagan—right now, for example, latest polls, about 60 percent of the population favor it. When Obama put through the Affordable Care Act, there was, you recall, a public option. But that was dropped. It was dropped even though it was supported by about almost two-thirds of the population. You go back earlier, say, to the Reagan years, about 70 percent of the population thought that national healthcare should be in the Constitution, because it’s such an obvious right. And, in fact, about 40 percent of the population thought it was in the Constitution, again, because it’s such an obvious right. The same is true on tax policy and others.

So we have this phenomenon where someone is taking positions that would have been considered pretty mainstream during the Eisenhower years, that are supported by a large part, often a considerable majority, of the population, but he’s dismissed as radical and extremist. That’s an indication of how the spectrum has shifted to the right during the neoliberal period, so far to the right that the contemporary Democrats are pretty much what used to be called moderate Republicans. And the Republicans are just off the spectrum. They’re not a legitimate parliamentary party anymore. And Sanders has—the significant part of—he has pressed the mainstream Democrats a little bit towards the progressive side. You see that in Clinton’s statements. But he has mobilized a large number of young people, these young people who are saying, “Look, we’re not going to consent anymore.” And if that turns into a continuing, organized, mobilized—mobilized force, that could change the country—maybe not for this election, but in the longer term.”

This article (Noam Chomsky: Bernie Sanders’ Movement Is A “Force That Could Change The Country”) is free and open source. You have permission to republish this article under a Creative Commons license with attribution to the author and TrueActivist.com