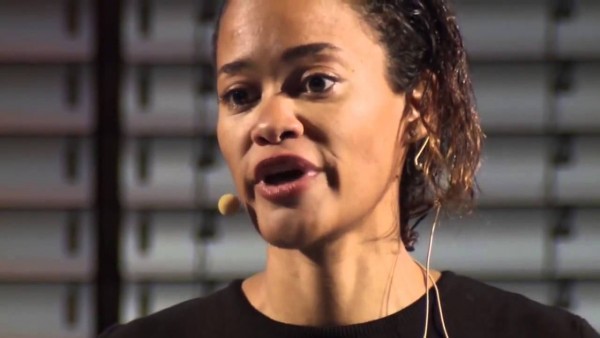 At the Technology, Entertainment, Design (TED) conference where individuals who are making difference in their communities are given the opportunity to share their story, an African woman called Mallence Bart-Williams has boldly spoken what many have described as the “hard truth”.

First, Mallence shared her concerns for the “richest country of the world”. She talked about the economic imbalance given that the Western Countries rely heavily on Africa’s wealth and yet, currencies in circulation in the African continent have little value compared to the Euro, Dollar, Pound Sterling, and others. She also highlighted organizations like Oxfam, the United Nations International Children’s Emergency Fund, the Red Cross and others who she said have been spending huge amounts of money creating Public Relations campaigns, painting Africa to be poor and dying, surviving on the mercy of the West. Oxfam is an international confederation of 17 organisations working in approximately 94 countries worldwide, claiming to find solutions to poverty and what it considers injustice around the world

But according to her, while Western countries give Africa with one hand under the flashing lights of the cameras, calling it grant-in-aid, they [Western Countries] take it back wisely with the other hand when no one is watching. She quoted the former French President, Jacques Chirac who admitted unreservedly in public that “We have to be honest and acknowledge that a big part of the money in our banks comes precisely from the exploitation of the African content. Without Africa France will slide down in the ranks of a third world power”.

This should tell you how the African continent has been reduced to a common place of loot and share by Western Wealthy Nations. It is a ground of exploitation. The continent was under slavery for 400 years. And after slavery, it was partitioned among Major European Powers who ruled it for another 100 years. And although the continent has been granted independence, it is in form not in substance. There is no economic independence. Western Countries still manipulate things on the continent.

After sharing her perspective on these issues, she also talked about her initiative, Folorunsho and the diamonds she found in the rough. She took the conversation back to her country’s capital, Freetown where there is a ghetto known as “Lions Base”. She introduced the gathering to a group of young men, some former rebels, others ex gangsters who she met by chance in the city. Sierra Leone was embroiled in a brutal Civil War from March 23, 1991 to January 18, 2002. By the time the war ended, an estimated 50,000 to 300,000 have been killed, and some 2.5 million others displaced both internally and externally. The damage the war has created is difficult to repair. And it has contributed significantly to impoverishment, and underdevelopment in the country. The country was also affected badly by the recent Ebola disease. Mallence explained how through creativity, she has been able to inspire some of the ex rebels, and gangsters to get off the streets, changing their course of lives. She also admitted their story inspired her to continue what she is doing. One of the destitute young men told Mallence how he aspires to be a lawyer in the future. Participant of the conference described her presentation as very bold and honest. Some said in order to lift Sierra Leone out of its current state for real change to happen, many more of the Mallences are need to emerge with similar initiatives.

The TED conference is a global set of conferences run by the private non-profit Sapling Foundation, under the slogan “Ideas Worth Spreading”.

Watch the video and share your opinion with us. How can we make the world a better place? It is time to stand up and speak about the injustices. Let us stand side-by-side to each other!

This Article (African Woman Boldly Speaks About The Exploitation Of Africa By Wealthy Countries At TED Conference [Video]) is free and open source. You have permission to republish this article under a Creative Commons license with attribution to the author and AnonHQ.com