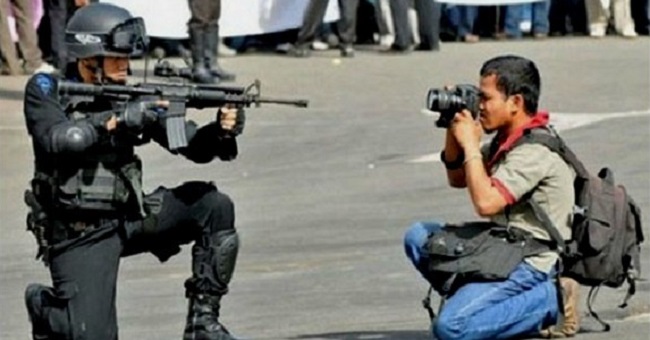 By Jennifer Baker at theantimedia.org

The Guardian’s effort to track fatal shootings by American police, known as ‘The Counted,’ reached the 1000 mark this week. With an average of more than three Americans shot and killed by police per day, this shocking statistic should be a wake-up call to the gun-toting vigilante justice that’s being trained into United States police forces.

In a country where its citizens are innocent until proven guilty in a court of law, the nation’s police force operates as the judge, jury, and executioner at least three times a day by taking the lives of citizens without significant accountability for their actions.

The United States government and U.S. citizens have never before had a comprehensive record of the number of people killed by law enforcement. Former U.S. attorney general, Eric Holder described the absence of a National data collection system to track fatal police shootings as “unacceptable.”

Until journalists began tracking fatal police shootings this year, the only way that information was collected was by a ‘voluntary’ program run by the FBI through which law enforcement agencies may or may not choose to submit their annual count of “justifiable homicides,” which it defines as “the killing of a felon in the line of duty.”

For comparison, according to the National Law Enforcement Officers Memorial Fund, 35 Police Officers have died on the job in firearm-related incidents in 2015.

Saudi Arabia, known worldwide for its public beheadings, executed only 90 people in the entire year of 2014 according to reports by Amnesty International, when an average of over 90 people are killed by American police forces every 30 days.

To further put the scale of this crisis into perspective, as the world rushes to war over the tragic deaths of 129 people killed earlier this week in Paris, United States police forces kill that many American citizens about every 40 days.

The crisis is clear. The United States trains its police officers to act as public executioners with a laundry list of worn out excuses and aggressive police unions at the ready to battle any public backlash and assist Officers with avoiding accountability for their actions.

A complete dismantling and total reconstruction of current policing systems seem the only available answer.

This article (American Police Kill 3 People per Day, over 1000 so Far in 2015) originally appeared on Revolution-News.com and was used with permission. The Anti-Media radio show airs Monday through Friday @ 11pm Eastern/8pm Pacific. Help us fix our typos:[email protected].