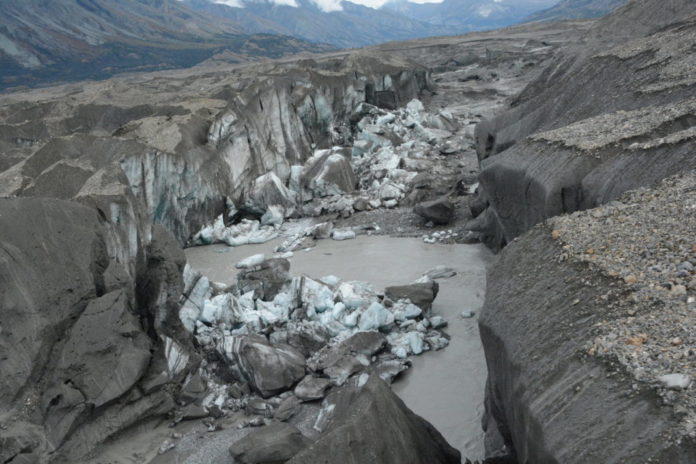 In an unsettling illustration of how global warming can ruin the world’s geography, a team of scientists say a rapidly melting glacier (one of Canada’s largest glaciers) caused the Slims River (which spanned up to 150 meters at its widest points) to completely change course and disappear over just four days — a process that normally takes tens of thousands of years.

A paper published in Nature Geoscience on April 17 outlined the phenomenon — which scientists are calling “river piracy” — and put the blame of the incremental retreat of Kaskawulsh glacier and the Slims River’s disappearance on climate change.

“Retreat of Kaskawulsh Glacier — one of Canada’s largest glaciers — abruptly and radically altered the regional drainage pattern in spring 2016… In late May 2016, meltwater from the glacier was re-routed from discharge in a northward direction into the Bering Sea, to southward into the Pacific Ocean. Based on satellite image analysis and a signal-to-noise ratio as a metric of glacier retreat, we conclude that this instance of river piracy was due to post-industrial climate change.” According to Hannah Devlin of The Guardian, the Slims River used to carry meltwater northwards from the vast Kaskawulsh glacier into the Kluane River, then into the Yukon River towards the Bering Sea. But a period of intense melting of the glacier meant “the drainage gradient was tipped in favour of a second river, redirecting the meltwater to the Gulf of Alaska, thousands of miles from its original destination.”

The change in the river’s flow affected the whole landscape, the study noted. The riverbed of the Slims River basin, now nearly dry, experienced frequent and extensive afternoon dust storms through the spring and summer of last year, the paper stated.

“Where the Slims once flowed, Dall sheep from Kluane National Park are now making their way down to eat the fresh vegetation, venturing into territory where they can legally be hunted. The formerly clear air is now often turned into a dusty haze as powerful winds whip up the exposed riverbed sediment.

“Fish populations are being redistributed and lake chemistry is being altered. Waterfront land, which includes the small communities of Burwash Landing and Destruction Bay, is now further from shore.”

The Slims River once flowed out to the Bering Sea, but now it flows into the Kaskawulsh River and looks like “a long, skinny lake.” Lead author Dan Shugar, geoscientist at the University of Washington Tacoma, told the BBC:

“Nobody’s ever seen a river piracy occur in modern times, at least to my knowledge. We had planned to study the Slims River last summer. But when we arrived in the Yukon it was barely flowing. A small channel had eroded in a large glacier that fed a number of small lakes.

“The glacial lakes used to feed two river systems — the Slims River and the Kaskawulsh River — but when water from one lake poured through the channel into another, it cut the Slims off from its water source. The piracy of the Slims is a reminder that climate change may bring surprises that we are not appreciating fully and that we’re not necessarily prepared for.”

The phenomenon “river piracy” is when tectonic shifts and long-term erosion causes rivers to disappear, and was coined in the 19th century. While geologists believe the Slims River could be the first case of modern river piracy and the first ever caused by climate change, it certainly won’t be the last. Lonnie Thompson, a paleoclimatologist at Ohio State University, warns:

“I think we could see similar divergence in streams in the Himalayas as well as throughout the Third Pole region, the Andes of Peru, other sites in northern Canada and Alaska. Often these events occur in remote and poor parts of our planet and thus go largely unnoticed by the larger population but greatly impact the livelihood of many families downstream.”

This article (An entire River in Canada Vanishes in Just Four Days, Thanks to Global Warming) is a free and open source. You have permission to republish this article under a Creative Commons license with attribution to the author and AnonHQ.com.