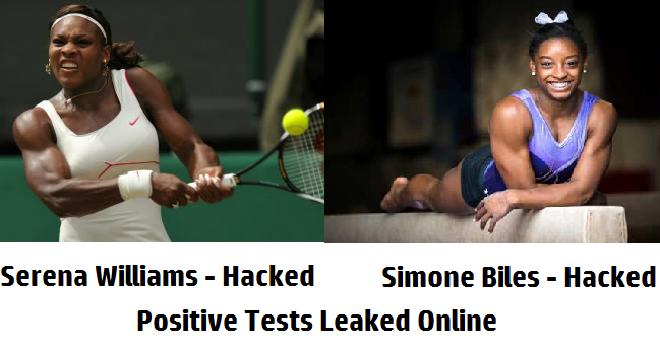 As is being reported by multiple sources, a group known as the ‘Anonymous Fancy Bears’ have hacked the World Anti-Doping Agency and Court of Arbitration for Sports – again. The information leaked indicates that the William Sisters and gold medalist Simone Biles, all tested positive for banned substances, but were allowed to compete anyway.

In a statement available through their web site –http://fancybears.net – the Fancy Bears go on to say:

“Greetings citizens of the world. Allow us to introduce ourselves… We are Fancy Bears’ international hack team. We stand for fair play and clean sport. We announce the start of #OpOlympics. We are going to tell you how Olympic medals are won. We hacked World Anti-Doping Agency databases and we were shocked by what we saw. We will start with the U.S. team which has disgraced its name by tainted victories. We will also disclose exclusive information about other national Olympic teams later. Wait for sensational proof of famous athletes taking doping substances anytime soon, according to a brief message from Fancy Bears.“

The Fancy Bears then go on to accuse the World Anti-Doping Agency and the Olympics in general of playing favorites in regard to athletes and nationality.

“Just before the 2016 Summer Olympics, the U.S. team was reported to be one of the medal favorites while being on top of the Rio medal forecast. Besides, the USA is commonly known to be always ahead of the game. As predicted, the USA dominated the 2016 Olympics medal count with 46 gold, 37 silver, 38 bronze for 121 total. The U.S. team played well but not fair. After detailed studying of the hacked WADA databases, we figured out that dozens of American athletes had tested positive. The Rio Olympic medalists regularly used illicit strong drugs justified by certificates of approval for therapeutic use. In other words, they just got their licenses for doping. This is other evidence that WADA and IOC’s Medical and Scientific Department are corrupt and deceitful.“

It is largely being reported that Russian hackers are thought to be responsible for the hack – almost no one is reporting on the Fancy Bears or Anonymous. It makes sense, however, that Russian interests might be involved, due to the fact that an unprecedented number of Russian athletes were banned from competing at the Olympics, earlier this year. The World Anti-Doping Agency even went on record calling “for a blanket ban of all Russian athletes from the Olympic games in Rio.”

In addition to this, the entire Russian Paralympics team was banned from competing in the 2016 Special Olympics. Instead, the country opted to host their own version of the games in Russia, for all of the athletes who had worked so hard over the years. In the end, 271 Russian athletes were eventually allowed to participate in the games, but it is understandable why their may be same bad feelings involved.

To prove that the World Anti-Doping Agency operated with prejudice against the country of Russia, while at the same time protected the US’s top athletes in the same line of testing, the Fancy Bears publicly released the Williams Sisters and Simone Biles medical records/tests.

The World Anti-Doping Agency (WADA) has condemned the breach and harshly criticized the group responsible. In an official statement released earlier today, WADA goes on to state:

““The World Anti-Doping Agency (WADA) confirms that a Russian cyber espionage group operator by the name of Tsar Team (APT28), also known as Fancy Bear, illegally gained access to WADA’s Anti-Doping Administration and Management System (ADAMS) database via an International Olympic Committee (IOC)-created account for the Rio 2016 Games. The group accessed athlete data, including confidential medical data — such as Therapeutic Use Exemptions delivered by International Sports Federations (IFs) and National Anti-Doping Organizations (NADOs) — related to the Rio Games; and, subsequently released some of the data in the public domain, accompanied by the threat that they will release more….

….WADA deeply regrets this situation and is very conscious of the threat that it represents to athletes whose confidential information has been divulged through this criminal act,” said Olivier Niggli, Director General, WADA. “We are reaching out to stakeholders, such as the IOC, IFs and NADOs, regarding the specific athletes impacted.”

This is not the first time Anonymous has hacked WADA, only the most recent. Prior to the start of the Olympics in August 2016, various Anonymous groups throughout South American teamed up to ddos the Rio Olympic homepage, hack various channels of Rio’s government and dump files stolen from WADA’s servers.

This article (Anonymous Hack of World Anti-Doping Agency Reveals Williams Sisters, Simone Biles, Took Banned Substances) is a free and open source. You have permission to republish this article using a creative commons license with attribution to the author and AnonHQ. Join the conversations at www.anonboards.com.