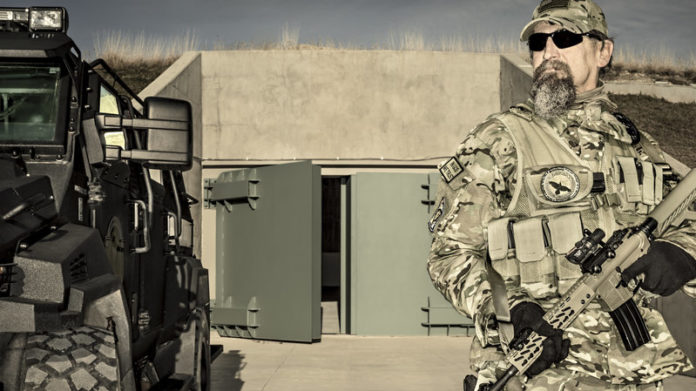 On January 26, the members of the Bulletin of the Atomic Scientists Science and Security Board moved the iconic ‘Doomsday Clock’ closer to midnight, from three minutes to two and a half minutes. The Doomsday Clock was last reset on January 22, 2015, at 3 minutes to midnight, when its minute-hand moved up two minutes; the clock then stood at 11:57 pm. This year,  humanity moved 30 seconds closer to global calamity thanks to nuclear threats, cyber threats, artificial-intelligence arms race, climate change, biosecurity, and bioterrorism.

Steve Huffman, co-founder and CEO of the social networking website Reddit, is one of the super-rich who are getting ready for the day when civilization falls apart. Huffman, who recently underwent a laser eye surgery to improve his odds of surviving a natural or man-made disaster, told The New Yorker:

“If the world ends — and not even if the world ends, but if we have trouble—getting contacts or glasses is going to be a huge pain in the ass. Without them, I’m fucked… I own a couple of motorcycles. I have a bunch of guns and ammo. Food. I figure that, with that, I can hole up in my house for some amount of time.” Huffman is not the only richest of the rich survivalist prepper preparing for doomsday, former Facebook product manager Antonio García Martínez has bought a homestead piece of property on an island in the Pacific Northwest and has stocked it with generators, solar panels and thousands of rounds of ammunition.

“When society loses a healthy founding myth, it descends into chaos. All these dudes think that one guy alone could somehow withstand the roving mob. No, you’re going to need to form a local militia. You just need so many things to actually ride out the apocalypse. I think people who are particularly attuned to the levers by which society actually works understand that we are skating on really thin cultural ice right now.”

Larry Hall, CEO of the Survival Condo Project – a fifteen-story luxury apartment complex built in an underground Atlas missile silo north of Kansas, says he has erected a defense against the fears of a new Cold War-era that can withstand a nuclear strike.

“It has enough food and fuel for five years off the grid; by raising tilapia in fish tanks, and hydroponic vegetables under grow lamps, with renewable power, it could function indefinitely. In a crisis, the SWAT-team-style trucks will pick up any owner within four hundred miles. Residents with private planes can land in Salina, about thirty miles away. You can send all the bullets you want into this place. If necessary, his guards would return fire. We’ve got a sniper post.”

“Saying you’re ‘buying a house in New Zealand’ is kind of a wink, wink, say no more. Once you’ve done the Masonic handshake, they’ll be, like, ‘Oh, you know, I have a broker who sells old ICBM silos, and they’re nuclear-hardened, and they kind of look like they would be interesting to live in’. ”

Late January, Ron Paul, former Congressman from Texas, warned the Economic Doomsday is nearer than expected. He predicted the second financial bubble is going to burst in the next two years, and there’s nothing anyone can do about it; even Donald Trump can’t stop it. How are financial experts readying to safeguard themselves against the impending financial ruin and protect their future?

“There’s a bunch of us in the Valley. We meet up and have these financial-hacking dinners and talk about backup plans people are doing. It runs the gamut from a lot of people stocking up on Bitcoin and cryptocurrency, to figuring out how to get second passports if they need it, to having vacation homes in other countries that could be escape havens.

“I’ll be candid: I’m stockpiling now on real estate to generate passive income but also to have havens to go to. I kind of have this terror scenario: ‘Oh, my God, if there is a civil war or a giant earthquake that cleaves off part of California, we want to be ready’.” This article (The Apocalypse is Near: Silicon Valley Super-Rich Get Ready for Nuclear War) is a free and open source. You have permission to republish this article under a Creative Commons license with attribution to the author and AnonHQ.com.