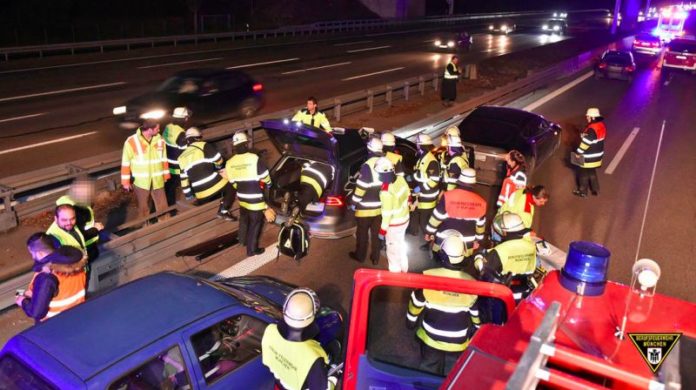 Elon Musk, founder of PayPal, Tesla Motors, and SpaceX, has rewarded 41-year-old Manfred Kick who risked his $70,000 Tesla car and his life to heroically save a 47-year-old unconscious driver of an out-of-control Volkswagen Passat on the Autobahn near Munich, Germany.

According to Muenchner Merkur, Kick was driving his Tesla Model S when he noticed a Volkswagen Passat maneuvering erratically, slamming against a guardrail multiple times. He called the police to report the incident, but when he realized that the man behind the wheel was unconscious, Kick pulled his Tesla in front of the Passat and slowly braked until the two cars came to a halt.

Kick then entered the Passat and gave the man, who appeared to have suffered a stroke, first aid. A passerby called the emergency services, which took the Passat driver to the hospital where he is said to be in a stable condition. Kick, who suffered internal injuries to his body, later told Muenchner Merkur:

“I had to stop his car somehow, otherwise it would have continued forever. And it was clear that the driver needed urgent help. I felt his pulse and then put him in a lying position so that the foam ran out of his mouth. I felt like I was in a movie. This was an extreme situation in which you just work.”

Although the police are still conducting a formal investigation against Kick, an officer who is handling the case said Kick is more likely to get an award for his bravery than a fine. “This is a normal procedure. If someone is injured in an accident, the prosecutor’s office has to be submitted [a report] for examination. Similarly, if a policeman acts in self-defense: It’s also necessary to check what happened exactly.”

In the meantime, Kick must first clarify who is responsible for the damage to his Tesla. “I do not know if the insurance pays, but that is also secondary. The most important thing is that the man is all right again.”

However, he doesn’t have to worry. When the story of Kick’s heroism spread online, Tesla CEO Elon Musk said he’ll foot the bill (Both Tesla and Passat are in need of repairs worth 10,000 Euros):

In appreciation, Tesla is providing all repair costs free of charge and expedited. https://t.co/D68HNJcCoQ

This article (Elon Musk Rewards Man Who Sacrificed His $70,000 Tesla to Save a Life) is a free and open source. You have permission to republish this article under a Creative Commons license with attribution to the author and AnonHQ.com.