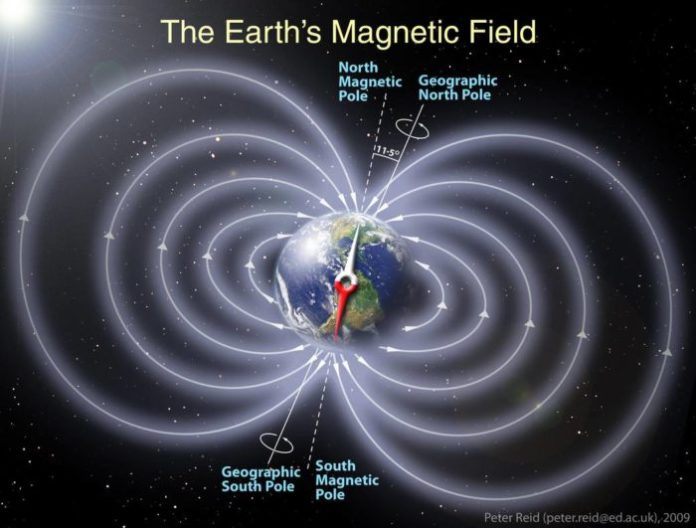 According to experts, the Earth’s magnetic field is made by swirling motions of molten iron in Earth’s outer core. Earth has two geographic poles: The North Pole and the South Pole. They are the places on the Earth’s surface that Earth’s imaginary spin axis passes through. It is said the magnetic field is similar to an invisible force that protects life on the planet from killer cosmic rays and deflects charged particles away from the Earth. This means the Earth’s stability hugely depends on the magnetic field. It is said everything from the Earth’s satellites and power lines to ocean currents and animal migration patterns are dependent on the poles’ stability. Therefore, if either side of the poles becomes unstable, theoretically, it would spell doom for planet Earth. It would be apocalyptic.

Geophysicists at the university of Leeds in the United Kingdom have warned that the stability of the magnetic poles of the Earth could be interfered with soon, leading to an instability that could spell doom for life on Earth. The researchers did not give a specific timeline for the impending disaster, but said it could happen soon.

Writing in the non-profit academic journal The Conversation, Dr. Phil Livermore and Dr. Jon Mound explained:  “The alteration in the magnetic field during a reversal will weaken its shielding effect, allowing heightened levels of radiation on and above Earth’s surface. Were this to happen today, the increase in charged particles reaching Earth would result in increased risks for satellites, aviation, and ground-based electrical infrastructure.” In 2003, Sweden was hit by the so-called Halloween storm, which caused widespread electrical and communications blackouts. The researchers said what happened in Sweden is an example of the consequences, should the Earth’s magnetic field flip today. This, they said, if it happens and human lives are spared during the disaster, the financial loss would be massive.

“Of course any time spent without electricity, heating, air conditioning, GPS or internet would have a major impact; widespread blackouts could result in economic disruption measuring in tens of billions of US dollars a day,” the researchers said.

Before this warning, some past experts explained how the world is long overdue, regarding a switch or flip in positions between the north and south poles of the Earth’s magnetic field. Researchers suggest the last time a full flip of the poles occurred was around 780,000 years ago. The temporal interference is said to have occurred about 41,000 years ago. During these two periods, researchers believe mass extinction of Earth’s species occurred. Robert Felix, an Ice-Age researcher claims that previous flips of the poles have been associated with mass disruptions such as the extinction of Neanderthal man, and with super volcano eruptions and other apocalyptic events occurring. Mr Felix authored the book Not by Fire but by Ice and Magnetic Reversals and Evolutionary Leaps.

This means if we are to experience a flip in any of the poles today, life on Earth could be wiped out, ending our civilization.

This isn’t the first time researchers have warned us of an imminent flipping or reversal of the Earth’s magnetic poles. In 2014, researchers from the University of California in Berkeley, United States, said planet Earth’s poles could flip in the next 100 years ahead of us. The researchers said the Earth’s magnetic field would weaken and dip within just 100 years, before flipping so that compasses point south – an event they admit could wreck the entire world’s power grid and expose the world to deadly cosmic rays.

It is believed that Earth’s magnetic field is weakening 10 times faster than normal at present. This has led some geophysicists to predict a flipping of the poles in the next few years.

This article (Geophysicist Researchers Warn Earth’s Magnetic Field Due to Flip and Destroy the Planet Soon) is a free and open source. You have permission to republish this article under a Creative Commons license with attribution to the author and AnonHQ.com.