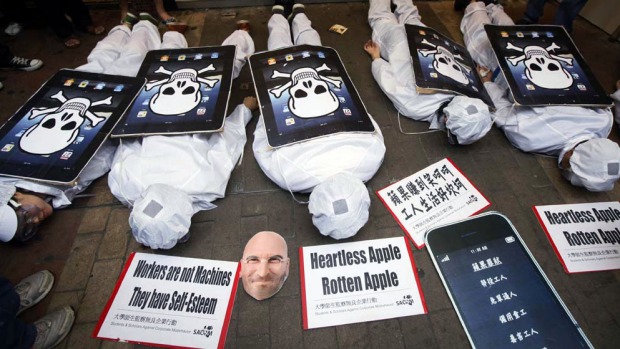 An investigation into labor practices at Chinese factories run by Foxconn and Pegatron, which make Apple products, has found that laborers work over 60 hours a week and make less than two dollars an hour – that’s at least 2,500 times less than Apple CEO Tim Cook’s $10.3 million compensation last year.

The report titled Something’s Not Right Here, overseen by the New York-based nonprofit China Labor Watch, relied on more than 1,200 pay stubs collected from workers at a Shanghai Pegatron factory in October 2015. An analysis of the stubs revealed that over 70% of the workers toiled more than 60 hours a week, some up to 72 hours. However, China’s overtime regulations cap the number of maximum overtime hours to 36 per month. China Labor Watch alleged:

“Right now, in Shanghai, China, a factory owned by the Taiwanese Pegatron Group is pushing out millions of units of the iPhone 6s for Apple. There, its young production workers toil six days a week in 12-hour shifts. Each day they are paid for 10 and half hours of work, not counting 15 minutes of unpaid meetings. The mandatory overtime shift runs from 5:30 pm until 8:00 pm.

“Before overtime pay, workers making the iPhone earn only the local minimum wage of $318 per month, or about $1.85 per hour. This is not a living wage. Even if the factory did not mandate overtime as it does, workers would still depend on their 60-hour workweeks to get by.

“After their long shifts, workers take a 30-minute shuttle bus back to their dorms where up to 14 people are crammed into a room. Mold grows pervasively along the walls. Bed bugs have spread throughout the dorm, and many workers are covered in red bug bites.” “The results of this investigation suggest to us that despite enjoying ever-growing commercial success, Apple refuses to do what’s necessary to ensure workers, who make that success possible, are treated fairly and work in safe environments. We can only conclude that Apple pursues profit maximization for itself and its shareholders no matter the lives of people making Apple products.”

This isn’t the first time Apple suppliers in China have come under fire over poor labor conditions. The gross violation of human rights in Chinese factories was highlighted in 2010 when 14 workers killed themselves at Apple’s biggest supplier, Foxconn.

In December 2014, a BBC investigation found standards on workers’ hours, ID cards, dormitories, work meetings and juvenile workers were being breached at Pegatron factories in Shanghai. The BBC’s undercover cameras showed Pegatron employees slumped over work tables, warned against falling against asleep and toppling into machines, and forced to say they were willing to take on night shifts and work standing up. The BBC alleged:

“Exhausted workers were filmed falling asleep on their 12-hour shifts at the Pegatron factories on the outskirts of Shanghai. One undercover reporter, working in a factory making parts for Apple computers, had to work 18 days in a row despite repeated requests for a day off. Another reporter, whose longest shift was 16 hours, said: “Every time I got back to the dormitories, I wouldn’t want to move. Even if I was hungry I wouldn’t want to get up to eat. I just wanted to lie down and rest. I was unable to sleep at night because of the stress.”

“Overtime is supposed to be voluntary, but none of the reporters were offered any choice. In addition to the excessive hours, one reporter had to attend unpaid meetings before and after work. Another reporter was housed in a dormitory where 12 workers shared a cramped room.”

MailOnline reported in March 2015 that Tian Fulei, a 26-year-old worker, was found dead on February 3, 2015, in a dormitory he shared with other workers at Pegatron. He’d  been working up to 12 hours a day, seven days a week. A verdict of ‘sudden death’ was given in court, but no autopsy was carried out, it claimed. The news came just after a month of China Labor Watch highlighting low pay and extensive use of overtime at Pegatron. “There is a tremendous amount of mandatory overtime. In some cases workers can choose not to do it but supervisors will say, “That’s fine, but you’re not going to get one more hour overtime at all this month”. So you have no overtime and practically don’t have a living wage, or you have too much, which can be dangerous.”

This article (Apple Pays Chinese Workers $1.85/Hour for a 12-Hour Shift, 6 Days a Week) is a free and open source. You have permission to republish this article under a Creative Commons license with attribution to the author and AnonHQ.com.