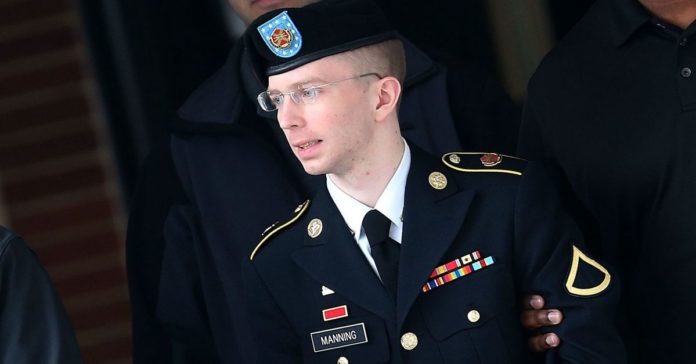 The United States Army informed imprisoned whistleblower Chelsea Manning, on July 28th, that she is under investigation on three new charges for her July 5 attempt to end her own life. These administrative charges – prohibited property, for items used to attempt suicide; conduct which threatens, for “putting the prison at risk,” and resisting the force cell move team, whilst unconscious – could result in Manning being forced into solitary confinement indefinitely. “The U.S. government’s treatment of Chelsea is a travesty. Those in charge should know that the whole world is watching, and we won’t stand idly by while this administration continues to harass and abuse Chelsea Manning,” Fight for the Future campaign director Evan Greer said of Thursday’s events.

Manning, a transgender woman, is serving a 35-year sentence at an all-male prison in Fort Leavenworth, Kansas following a 2010 arrest for leaking information about the Iraq War via WikiLeaks, to the public. She has been denied medical treatment for her gender dysphoria, and last year was threatened with solitary confinement for possessing expired toothpaste and LGBTQ-themed reading material.

“It is deeply troubling that Chelsea is now being subjected to an investigation and possible punishment for her attempt to take her life. The government has long been aware of Chelsea’s distress associated with the denial of medical care related to her gender transition and yet delayed and denied the treatment recognized as necessary,” American Civil Liberties Union Staff Attorney Chase Strangio said. “Now, while Chelsea is suffering the darkest depression she has experienced since her arrest, the government is taking actions to punish her for that pain. It is unconscionable and we hope that the investigation is immediately ended and that she is given the health care that she needs to recover.”

If convicted of these three new charges, Manning could spend the rest of her sentence in solitary confinement, forego any chance of parole and may even be forced to serve another nine years.

This article (Army Threatens to Punish Manning over Suicide Attempt) is a free and open source. You have permission to republish this article under a Creative Commons license with attribution to the author and AnonHQ.com.