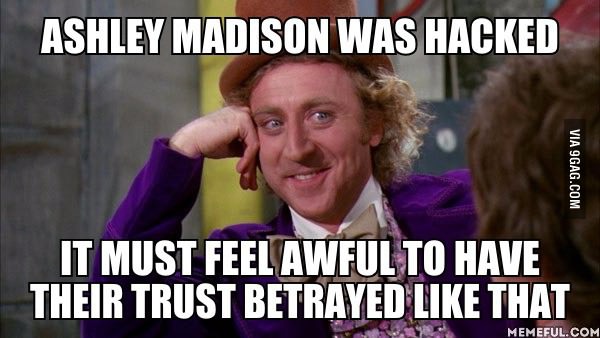 Ashley Madison, that website for unhappy spouses looking for sex on the side, was controversial enough when it was first marketed. Banned in a number of more “prudish” (AKA family-oriented) countries, Ashley Madison used that controversy to court even more clients in countries where it wasn’t banned. To the detriment of their clients, it would seem, because a massive hack “stealing” some 10 gigabytes worth of raw data has now exposed their dalliances, not just to their soon-to-be-unhappy spouses, but to the whole world.

The hackers had this to say: “Avid Life Media has failed to take down Ashley Madison and Established Men,” the Impact Team wrote in a statement accompanying the alleged leak, according to Wired. “We have explained the fraud, deceit, and stupidity of ALM and their members. Now everyone gets to see their data. Find someone you know in here? Keep in mind the site is a scam with thousands of fake female profiles. See ashley madison fake profile lawsuit; 90-95% of actual users are male. Chances are your man signed up on the world’s biggest affair site, but never had one. He just tried to. If that distinction matters.

“Find yourself in here? It was ALM that failed you and lied to you. Prosecute them and claim damages. Then move on with your life. Learn your lesson and make amends. Embarrassing now, but you’ll get over it.”

Now, there’s a whole debate raging on of privacy of cheaters VS. The ethics of hackers…. Did the hackers destroy families, or did the cheaters do so themselves? But let’s not go into that moral quagmire, since both sides appear to have some validity. Instead, let’s see what has been revealed so far.

Impact Team is the name of the hacker group, and boy have they made a mark with this hack. 30 MILLION accounts, and a swath of confidential company details have now been made public. The mainstream media has taken a sympathetic stand with the company(I do find it oh-so interesting that there is a media blitz FOR internet privacy when politicians and employees of the Vatican, Bank of America, JP Morgan, Amazon and Boeing are implicated though… I’m so used to the opposite when the entire mainstream media chose to call Snowden a “leaker” rather than a whistle-blower when he revealed the NSA’s surveillance program…)

Thousands of governmental officials may have now lost their carefully pruned “squeaky-clean” image (if they had used any personally-identifiable information); 15,000 of the emails revealed have .gov or .mil in them (which means they are registered with government or military personnel). Who’s stupid or arrogant enough to sign up his/her government email on this website? Well, we are talking about politicians….

On the other hand Ashley Madison does not require VERIFIED email accounts, which means that many of these might be people trying to muddy a rival/foe’s reputation… Still though, we’re talking about politicians. Fingers crossed we get a Hillary or a Jeb in there somewhere, maybe with an intimate personally-identifiable picture…

For a website that claims to be “discrete”, it is certainly surprising to see that the hackers were able to unveil street addresses, names, email accounts, even phone numbers and credit card transactions of some 33 million accounts…. Now, let’s see what dirt has been dug up on everyone’s favourite corporations and their corporate henchmen: Jason DeZwirek is the director of CECO Environmental Corp, a Cincinnati-based environmental company founded in 1966. He is also founder, chairman and CEO of Kaboose, Inc., “the largest independent family focused online media company in the world.” He is ALSO the largest shareholder and thus makes the most money from this company which profits from… devastating families. Hey, why not profit from families as they form a cohesive bond through your media…. and then profit from destroying that bond? Nice work. His father is even less a saint, and was CECO’s chief executive for over 30 years: In 2013, he paid out $1.5 million in penalties to the U.S. Securities and Exchange Commission to resolve insider-trading charges. He’s the third largest shareholder of the company. Like father, like son.

Corporate Paypal accounts were also available to the hackers for at least a month.

Ironically, the above document was also leaked detailing the company’s (correct) fears that their data might be compromised eventually. No evidence of corrective steps was found in the leak, suggesting that the company really really really values the confidentiality of its clients. Above, under “Publicity Stunts” we have the company crowing at its success at convincing the inapt mainstream media to give it free publicity…

Wanna know how this company really feels about its clients?? The above document shows a suggested “Product Innovation”, pilfering even more money from clients who want to leave the website and delete themselves from the network:  “Users of the service want full discretion,” it says. “They can pay to eliminate any trace of themselves from the site.”

So…. if you don’t want your details to eventually surface (because of a hack, which we anticipated but will not secure ourselves against, for example) please pay us money.

Seriously, they were practically blackmailing clients into paying them a fee- how the heck can the mainstream media maintain their support for this website is beyond me, all the while claiming that clients could be blackmailed by hackers. HELLO, the COMPANY was already blackmailing them. Even after paying the 19 bucks to delete their profile, it seems that Ashley Madison kept their personally-identifiable profile-info anyway.

‘Users almost always pay with credit card; their purchase details are not removed as promised, and include real name and address, which is of course the most important information the users want removed,’ the Impact Team said.

I think the real lessons here, which nobody is talking about, is :

When a business is run explicitly to destroy lives, it is going to be less ethical than all the cheaters and hackers put together. Corporations are evil; openly evil ones are even worse.

Anonymity reveals the best in humanity. It also reveals the worst. Anonymity is thus used for good and evil, but what few understand is that corporations offer a type of anonymity; a faceless entity that does what is profitable at any cost, with no employee liable; the CEO of Ashley Madison has admitted that he would be “devastated” if his wife had a profile on his site.  From Salon:

Biderman confessed that if he discovered his own wife using Ashley Madison, he “would be devastated.” Naturally.

As long as it’s only other people’s commitments, Biderman’s ethics remain strictly laissez-faire.

As an individual, he knew what he was doing was wrong. As the head of a company,  he did it and the entire mainstream media portrayed his company as the victim when his lack of interest in his customer’s online security led to the hack. Is this not anonymity at its worst?