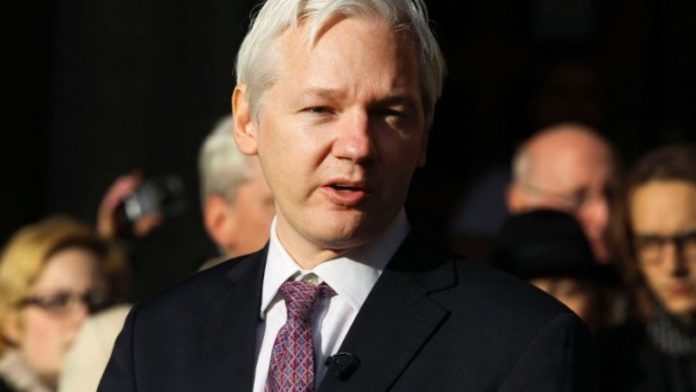 Julian Assange agreed to be interviewed by FOX News to decimate claims leaked emails from the Democratic establishment had been hacked and provided by Russian government actors.

Wikileaks founder Julian Assange came forward after a long period of silence for a video interview with Fox News’ Sean Hannity — in particular, to decimate claims leaked emails from the Democratic establishment had been hacked and provided by Russian government actors.

“The narrative has begun that, in fact, the U.S. government is accusing Wikileaks of having received materials from Russia and Russia’s cybercriminals with the political agenda of influencing the election. And obviously they’re talking, not just about the John Podesta emails, the DNC emails, but in other ways. I’ve asked you before, I’ll ask you again today — did Russia give you this information, or anybody associated with Russia?” Hannity asked.

“Our source is not a State party,” Assange told Hannity, once again confirming assertions he and Wikileaks have made on previous occasions. “So, the answer for our interactions is ‘no.’”

Continuing, he explained the political establishment has attempted to distract from the revelations in the leaked documents — which exposed the true words of Clinton and others in her campaign,

“And the American public read that information, true information, and said, ‘We don’t like these people.’ And then voted accordingly.”

Rather than acknowledge the breadth of corruption and behind-the-curtains nastiness on display in the documents, the establishment has attempted to conflate Wikileaks with Russians hacking the election — an accusation Assange explained amounted to bait-and-switch, as,

“Even Obama has had to admit that there was no hacking of U.S. voting machines.”

“But … the main focus for most Americans is that, they are being told by Hillary Clinton’s campaign, by the President of the United States, there are the Department of Homeland Security, Office of the Director of National Intelligence, et cetera, that in fact,” Hannity asked, “that Wikileaks was working with the Russian government to influence the election. Is that true in any way, shape, matter, or form?”

“No, it is absolutely false,” Assange replied, “and, if you read their statements carefully, you’ll see they don’t actually say that. They kind of mention one fact here, and one fact there, and nothing else.

“In the most up-to-date information, the twenty-ninth of December, where the FBI, DHS, White House, et cetera, made a statement, what is completely absent — from all those statements — is Wikileaks. Totally absent. So, what’s going on?

“I believe two things are going on. Number one, they don’t have the evidence that Wikileaks is involved in that way. Now, why am I confident about that? Because there is one person in the world — and I think it’s actually only one — who knows exactly what is going on with our publications. And that’s me.”

Asked whether he could state “unequivocally” the information published by Wikileaks did not come from any person associated in any way with the Russian government, Assange stated,

“We can say, and we have said repeatedly over the last few months, our source is not the Russian government, and it is not a State party.”

Again refusing to comment on the clarifying details concerning the source of documents leaked to the publishing organization, Assange emphasized that — although he could not confirm or deny reports from close friend and former British intelligence agent, Craig Murray the leaker came from within the Democratic establishment — “our sources are not a State party.”

Hannity then directly requested clarification for several accusations bandied about by the United States political establishment, asking if Assange had ever conversed with Russian President Vladimir Putin, to which he replied flatly, “No.”

“Have you ever talked to any of his surrogates?” the host continued.

“Have you ever talked to Donald Trump?” Hannity asked, addressing suspicions Wikileaks had acted on behalf of the billionaire businessman’s campaign.

“Any of his surrogates?”

“Not one?” Hannity prodded.

“There was some report you might have talked to someone who was not associated with the campaign, Roger Stone?”

Claiming The Russians hacked anything has been largely a creation of the corporate press and politicians, and, as he explains, Obama is “acting like a lawyer,” and “If you look at most of his statements, he doesn’t say that. He doesn’t say that WikiLeaks obtained its information from Russia, or worked with Russia.”

Addressing one of the most frequently touted ideas that leaked documents influenced the election in order to sway the election for Donald Trump, Assange noted it would be impossible to tell for sure, but,

“If it did, the accusation is that the true statements of Hillary Clinton and her campaign manager, John Podesta, and the DNC head, Debbie Wasserman-Schultz — their true statements is what changed the election.”

Discussing millions of documents hacked by the Chinese, about which the aforementioned parties and the Obama administration have selectively chosen not to focus, Hannity asked whether Assange felt the move was intended to “delegitimize Donald Trump — what’s your interpretation of that?”

“It is exactly what it is designed to do … If you look at what the allegations are, they don’t mention Wikileaks, for the 29th, they don’t mention our publications. Our publications had wide uptake by the American people. They’re all true. But that’s not the allegation that’s been presented by the Obama White House. So, why such a dramatic response? Well, the reason is obvious: they’re trying to delegitimize the Trump administration as it goes into the White House. They’re going to try — they are trying to say that President-elect Trump is not a legitimate” president.

The Wikileaks head went on to explain the Democratic Party continues to attempt “short term wins” in such criticisms, while ignoring the factual substance of leaked documents — and the American people “want as much true information as possible.”

Wikileaks has been vilified for not releasing documents pertaining to Trump or his campaign — but, as Assange has repeatedly contended, no such documents were provided to the publisher.

“If the information you had was about Donald Trump and his campaign,” Hannity asked, “would you have equally released that?”

Murray, Assange’s associate — and former intelligence officials entirely unassociated with Wikileaks — have suggested the documents were leaked by a disgruntled party inside the Democratic establishment. On that topic, after Assange noted the perfect record Wikileaks has maintained in regard to authenticity of documents and refusal to expose the identity of sources, Hannity asked, since the leaker was not Russian,

“Can I ask … take it one step further. Can you say that the source was within the United States?”

After a frustrated pause, Assange replied, “I don’t want to constrain whether it was someone inside the United States, in the DNC, in the service providers that provide for the DNC, or outside, et cetera. I think that we have already pushed it quite a lot … more than we would like, by saying it was not a State party.”

But speaking out with that qualification had been a necessity as “there was a serious attempt to distract from the content of our publications with this Russian narrative.”

On the joint report from DHS and the FBI, Assange noted the tools provided as loose evidence of Russian hacking are commercially available — to anyone — and nothing laid out by the agencies evinced solid proof.

Additionally, Podesta’s careless choice of “password” for his password, and his staff’s erroneous assertion the infamous phishing email he received was legitimate, Assange said,

On the topic of corporate media’s lack of coverage of the content of the leaked documents — and exposed collusion with the Clinton campaign — Assange described the American mainstream press as “ethically corrupt.”

Despite allegations Assange and his organization had been somehow motivated to influence the election in favor of Trump, he noted,

“My motivation, for twenty years — ten years with Wikileaks — is to publish true information that is otherwise unassailable.”

Emphasizing he has no party political agenda, he added,

“We believe that the best type of government comes from a government that is scrutinized by the people, when they have true information about how governments and major corporations, other power actors in society, are behaving.”

Assange has been confined for years in the Ecuadorian Embassy in London under threat of extradition to the United States — effectively making him a political prisoner. But vociferous anti-Russia rhetoric and allegations Russian hackers provided documents to Wikileaks forced Assange to come forward — first in an interview on Hannity’s radio program, and then this face-to-face interview — to call out the claims as hollow and baseless.

Although mainstream media has parroted these allegations against Russia, perhaps hearing Assange’s words in this rare appearance will help quiet the new Red Scare propaganda — and bring logic and common sense back to the table.

This article (Assange Appears on FOX News and Destroys the Russia Hack Conspiracy Theory [Watch]) is free and open source. You have permission to republish this article under a Creative Commons license with attribution to the author and TheFreeThoughtProject.com