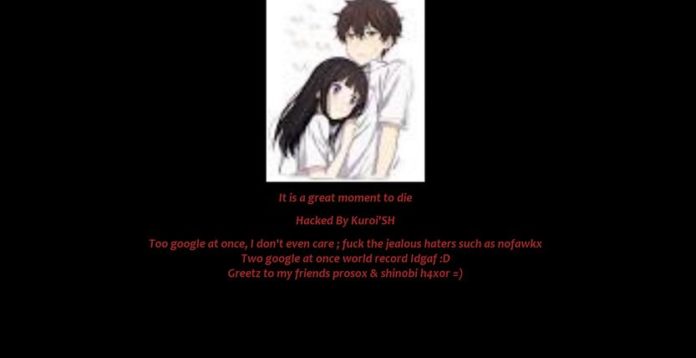 Google Brazil was inaccessible to its citizens last Tuesday after a hacker defaced the Google Brazil homepage with his own page, sending onlookers with a puzzling message.

The hacker who goes by Kuroi’SH worked alone to deface the page, with a down time for the site lasting around 30 minutes.

Google Brazil didn’t talk about the hack, but they did divert the traffic to another server while Google Brazil took time to regain their homepage.

Kuroi’SH demonstrated that anything is hackable. This isn’t the first time this hacker has attacked large targets. Once, the hacker in question hacked into the subdomain of NASA and showed support for Palestine, also at the time leaving a message on it. Similarly, he left another message during his latest attack, but what seems of a more personal agenda:

“It is a great moment to die. Hacked by Kuroi’SH! Two Google at once, I don’t even care; f**k the jealous hates such as Nofawkx. Two Google at once world record idgaf :D. Greets to my friends Prosox & Shinobi h4xor.”

This article (Brazilian Google Hacked By Single Handed Hacker) is a free and open source. You have permission to republish this article under a Creative Commons license with attribution to the author and AnonHQ.com.