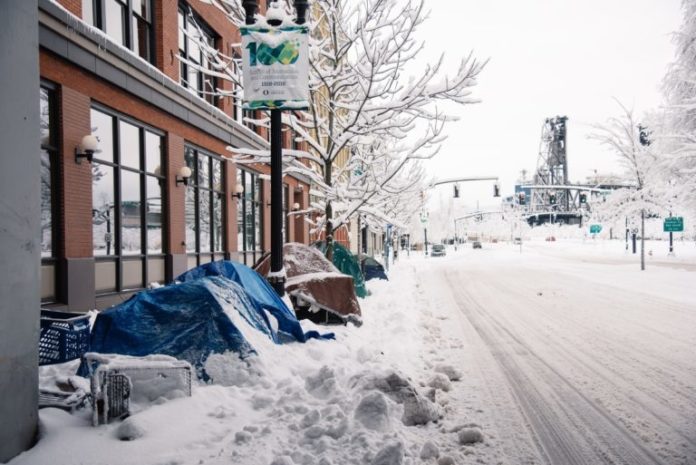 The homeless mother of the baby that never had a name was found wandering the streets with no shoes on.

A newborn baby of a homeless woman has died after a life of just one day due to an extreme ice storm in Portland, Oregon. Portland police officers arrived at the scene after they received a 911 call about a homeless woman that had been seen walking on the streets without any shoes on. The woman was seen showing a newborn baby to a passerby who was on his way to work. The morning of the call involved temperatures in the low thirties, whilst an ice storm had battered through the Portland area the day before. Police officers had texted each other about the homeless young baby, according to the Willamette Week, which was how they learned that the baby had been born only hours before the 911 call was received.

Although it was believed that the baby had been delivered without complication, the freezing temperature conditions had made it crucial to get the baby to the Oregon Health and Science University hospital. According to reports, at least three people had made contact with the baby and believed that it was alive and breathing, with a good chance of survival. One of the texts read, “Baby is conscious and breathing okay, but has been outside this entire time”. The mother of the newborn baby was 34 years old and described by an officer at the scene who interviewed her as “very mentally ill”. The officer claimed that during his time speaking to her she struggled to answer any questions about herself and the young baby, and when asked where the baby had been born she replied, “by the miracle of immaculate conception”.

Two pediatric emergency room doctors, Dr. Sarah Blackmon and Dr. David Sheridan, attempted to revive the baby for 25 minutes, but their efforts were unsuccessful. They told the Oregon medical examiner that the baby was born roughly one month premature. They also both told Robert Harley, the Portland police child abuse detective, that the baby was not stillborn, although Dr. Karin Gunson, the Oregon state medical examiner, came to the conclusion that the baby was, in fact, stillborn, after conducting an autopsy, which she wrote in her official report.

Under state law, officers must investigate a baby’s death, if the cause of death is found to be due to exposure. However, no investigation is required to be carried out if the baby is stillborn. During the time of the incident, the baby’s death was not publicly reported, which is allegedly due to police waiting for the cause of death to be determined, according to the Portland police spokesman, Sgt. Pete Simpson.

Portland is currently in the midst of a shortage of affordable housing, and due to this and freezing temperatures, Portland has consequently seen the deaths of four other homeless people caused by hypothermia already this year. The first homeless person to freeze to death was David Guyot, who was a 68-year-old that was found at a bus stop before being pronounced dead on New Years’ Day. The very next day, 51-year-old Mark Elliott Johnson was found dead on a pavement, whilst Karen Lee Batts, 52, died of hypothermia shortly after she was evicted from her apartment for owing $338 in late rent.

Statistics have shown that there have been more hypothermia-related deaths in less than three weeks than Portland has seen in the last five years. Renting prices, which is seen as a major cause of death through exposure, has risen across the city by an average of 34 percent between 2010 and 2015.

This article (Baby Less Than 24 Hours Old Dies From Ice Storm After Being Found With Homeless Mother) is free and open source. You have permission to republish this article under a Creative Commons license with attribution to the author and TrueActivist.com