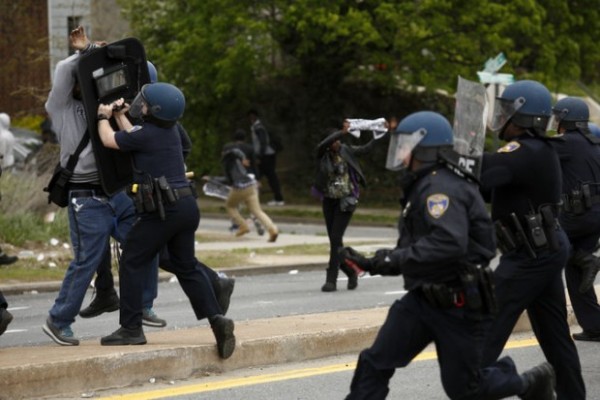 We get a lot of criticism these days for being ‘too hard’ on the police in the United States. But let us be clear, it is not that we are interested in projecting them in bad light, we only write about what they have truly done; that which is clear and has been verified.

A lot of African-Americans have been demonstrating in Baltimore recently, after the death of Freddie Gray while in police custody. Gray was arrested on April 12th by local police and it is said he had suffered spinal damage and a squashed voice box due to how he was handled by the authorities.

In a protest like this, the likely victims of brutality and intimidation are the protesters. This time however, not only the protesters suffered abuse. A journalist for Russia Today (RT) had her bag snatched by an unidentified protester, while other journalists were detained or beaten by police as they covered the protest. A video, posted by CityPaper.com, showed police tackling and beating its photo editor, J.M. Giordano, as the journalist took pictures of the scene outside the police’s Western District headquarters, on Saturday night. In the video, you can see Giordano wearing a green jacket as he and a protester get knocked to the ground by police, getting beaten as somebody is heard yelling, “He’s a photographer! He’s press!” Giordano said he was standing next to some protesters facing the police line, when someone threw a rock which hit a police officer’s shield.

Another photographer, covering the protest for the Reuters News Agency, was also reported to have been arrested and cited for disorderly conduct, after chaos broke out in the area he was filming.

The RT journalist had been filming protesters posing for the camera, chanting slogans like “F— the police!” One young man is heard saying, “Rest in peace to my man, Freddie G.,” as the camera rolls on a darkened street corner with more young black males immediately joining in and uttering obscenities about police brutality, targeting minorities while flashing hand gestures at the recording device.

The chase lasts for about 15 seconds and goes on for only a block before the robber runs mistakenly into police officers, who arrest him and handcuff him on the ground.

“Where’s your bag?” one of the officers asks. “It’s right there. He has it,” the journalist whose voice appears to be a lady’s says, pointing at two officers standing over a light-colored satchel. Afterwards, the journalist breaks down into tears and finally cuts the recording off. Officials of RT have not commented on the issues, or revealed the identity of the journalist.

The police have announced that they have arrested 31 adults and four juveniles, for crimes such as disorderly conduct, theft and assault of police during the protest. They also confirmed that police had inadvertently detained two journalists, as officers attempted to disperse protesters engaged in violent activity.

“We will continue to do everything possible to ensure the safety of those engaged in the expression of their constitutional rights,” the police said in a release.

Meanwhile, Baltimore’s community leaders have been calling for calm, with Mayor Rawlings Blake using social media to try and calm the young men involved in violent protests against police and journalists.

We all have the right to voice our disagreement in the form of protest, let’s not engage in violence. It completely destroys our case. Register your disagreement in a peaceful way so that others will understand that you are fighting for a good cause and give you a helping hand. We urge the protesters and police to exercise restraint in dealing with the volatile situation.