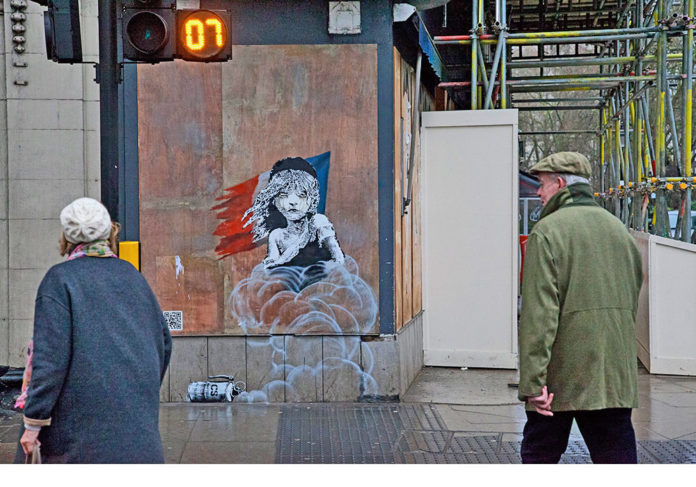 A new artwork by graffiti artist and activist Banksy, known for his criticism of the UK’s handling of the refugee crisis, has appeared near the French embassy in London. The artwork, criticizing the use of teargas in the “Jungle” refugee camp in the northern French port city of Calais which is home to some 4500 migrants, depicts the iconic image of a young girl from Les Misérables with tears in her eyes as she is enveloped by CS gas.

The artwork is interactive and includes an interactive QR code. If viewers hold their phones over the code, it links them to a seven-minute online video showing riot police using teargas, concussion grenades, and rubber bullets against refugees during a raid on the camps on 5 January.

A new Banksy artwork has appeared near the French Embassy in London.The image features a QR code that links to footage that appears to show the Jungle camp in Calais.

It is being reported that French police used the tear gas to create a 100-metre buffer zone between the camps and the motorway. A police spokesperson for the local prefect in Calais denied that teargas was used in the camp.“It’s not in our interest to use tear gas unless it’s absolutely necessary to restore public order, and it is never used in the camp itself,” police spokesperson Steve Barbet told The Guardian.

But the seven-minute clip posted on YouTube refutes his claims.

UK’s leader of the Labour Party, Jeremy Corbyn, who visited Dunkirk and Calais on January 23 on his first foreign visit as Labour leader, described conditions at organized French refugee camps near the Channel Tunnel as “shameful” and much worse than he expected.

UPDATE: The mural in Knightsbridge has been covered up by building firm “in order to preserve it”. Mike Sadler, director of Cheval Property Management Limited, said the firm was “discussing future plans for the artwork”.

I guess ‘public art’ ain’t what it used to be. #Banksy piece near the French embassy, London, gets covered up quick. pic.twitter.com/HhValSww0a

The artwork is Banksy’s latest attack on the European response to the continuing refugee crisis. An artwork depicting Apple founder Steve Jobs recently appeared in the Calais refugee camp. A second artwork adapted French painter Theodore Gericault’s famed image “The Raft of the Medusa” but showed refugees attempting to flag down a luxury yacht. A third artwork showed a child looking towards Britain through a telescope, while a vulture stands beside her.

This Article (Banksy’s Interactive Artwork Near French Embassy In London Denounces French Treatment Of Refugees) is free and open source. You have permission to republish this article under a Creative Commons license with attribution to the author and AnonHQ.com.