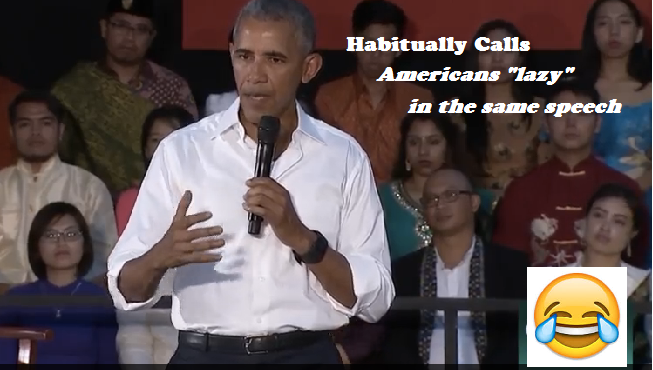 People will try to spin this one way or the other, say that Barack Obama is out to destroy America and does not care about the American people – it will not be the first time such accusations have been made in the main stream media #Hannity. However, when taken for face value, the statements do depict an accurate reality about the state of affairs in American culture.

In terms of international culture and global affairs, as far as industrialized, developed countries go, the United States is one of the most globally uneducated populations in the world. It is a mindset that has allowed countless Americans to believe they are better then everyone else and it is part of the reason most people hate US tourists overseas – except for their money. If you have quarrels with this claim, read how US students rank on a global scale here: http://anonhq.com/educational-reform-students-skip-college-favor-skilled-trades-vocational-training/

This week on his travels to Laos President Obama publicly called Americans “lazy” not once, but twice. He first called Americans lazy because they are close minded in the fact that they do not spend much time getting to know other people – of opposing cultures. Many people are fixed in their ways since upbringing.

Sabaidii, Laos! Honored to be the first U.S. president to visit Laos and to begin a new partnership between our countries.

He then went on to add, “If you are in the United States, sometimes you can feel lazy and think, ‘You know we are so big we don’t have to really know anything about other people.’ That’s part of what I’m trying to change, If we are not here interacting and learning from you, and understanding the culture of the region, then we will be left behind, We will miss an opportunity, and I don’t want that to happen. Okay?”


As you might expect, this did not sit to well with many right wingers in the US – who have already been calling Obama “anti-American” for years now. President Obama has often found himself the victim of day time public radio shows and news sources such as social media – including Twitter – for candid statements abroad, such as the one above.

It is not surprising though these days, it seems any statement outside of ‘America is the baddest country in the world’ or ‘we are going to bomb the $hit out of you if you don’t do what we say’ is not Patriotic.

SO DONE WITH @POTUS and his lies to Americans. Has the nerve to call us racist & lazy in Laos. Stay there Obama. AMERICA doesn’t want you!!

We could seriously go on like that for a while, but I think you get the point. I happen to agree with Mr. Obama that when it comes to other areas of the world, Americans are culturally uneducated and ignorant – the statistics above even back it up.

Fact of the matter is though, whether you agree with Obama had to say or not, you should be mad at what he is saying. There is no excuse for Americans not to learn more other then the fact they plain do not want to invest the time. Perhaps it speaks in part to the failings of US educational systems at the same time.

However, rather then get belligerent with one another – writing incitement statement and flinging proverbial poop at on another – the other solution is to address the problem. What makes me more angry then the fact that my President called my country lazy is the fact that he was exactly right in what he said. Though to be fair though, I have not seen any evidence to indicate he is actively doing anything to fix the problem and change it.

This article (Barack Obama Just Called Americans Lazy, Twice, For Being Culturally Ignorant of Other Civilizations) is a free and open source. You have permission to republish this article using a creative commons license with attribution to the author and AnonHQ. Join the conversations at www.anonboards.com.