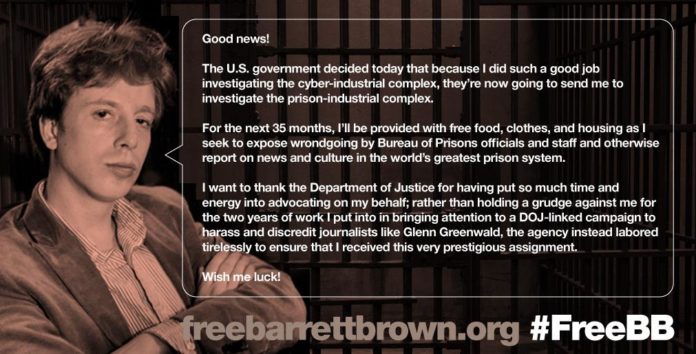 Recently released Barrett Brown served 63 months in prison after being found guilty of ‘cyber intrusion’ – cutting and pasting a link while crowdsourcing Project PM, a think tank dedicated to researching and investigating surveillance abuses conducted by companies. One investigation involved Stratfor and an email hack by Anonymous’ Jeremy Hammond.

Stratfor, described by WikiLeaks’ Julian Assange as an “allied institution” to the Pentagon, was struck a blow by political activist Hammond when he hacked into their systems in 2011 and was able to pull (and send to WikiLeaks) over five million emails. Hammond was sentenced in 2013 to ten years in a US Federal prison. Initially charges that would have seen Brown facing a possible sentence of more than 100 years were dropped after he entered a plea deal. Released last year, Brown served over 5 years in prison for the link he shared, and was ordered to pay nearly $900,000 in fines and restitution.

The arrest and imprisonment of Barrett Brown was viewed by many as an attack on journalism and political activism.

“These charges are at odds with national and international protections for the press and freedom of expression. The third charge concerns his speech acts after the FBI threatened to charge his mother unless he handed over his source material. There are no other charges,” Assange wrote at the time, showing his personal support for Brown’s situation.

“Well, this is part of the wider crackdown against journalistic sources,” said Assange to Democracy Now’s Amy Goodman. “Obama has, in relation to the Espionage Act, applied it to more people, more journalistic sources and journalists, than any—than all previous administrations combined, going back to the origin of that act in 1917.” Fast forward to this month, and Kevin Gallagher, who helped establish the crowdfunding campaign that raised upwards of $40,000 for Brown’s defense case, has filed a lawsuit against the Justice Department.

According to the filing, the DOJ illegally monitored everyone who donated to support Barrett Brown. It further argues that the Stored Communications Act was also violated after the FBI sought its content without a warrant.

Part of the filing reads:

“The government agents responsible for the arrest and prosecution of the journalist violated the First Amendment by seeking the identities of the donors to the crowd-funding campaign, as well as the amounts of each donation. This violation began when Assistant United States Attorney Candina Heath sent a subpoena (the “WePay Subpoena”) to WePay, Inc. (“WePay”), the host of the crowd-funded legal defense fund, directing WePay to send “any and all information” pertaining to the legal defense fund to Special Agent Robert Smith of the Federal Bureau of Investigation (“FBI”). The subpoena claimed that the information it requested would be used at the trial of the jailed journalist. However, the identities of, and the amounts donated by, the journalist’s supporters are completely irrelevant to the charges levied against the journalist. On information and belief, the WePay Subpoena was part of a larger scheme by Ms. Heath and Mr. Smith to unlawfully surveil the donors in violation of the First Amendment. As the Ninth Circuit has recognized, “[t]he right of those expressing political, religious, social, or economic views to maintain their anonymity is historic, fundamental, and all too often necessary. The advocacy of unpopular causes may lead to reprisals – not only by government but by society in general. While many who express their views may be willing to accept these consequences, others not so brave or so free to do so will be discouraged from engaging in public advocacy.”

Furthermore, the lawsuit, which Gallagher is intending to establish as a class action, questions the administrative subpoena used for the request of the information as one issued under false pretences to advance the prosecution against Brown, who, remember, was in court for posting a link.

The lawsuit claims the overreaching of the FBI into private individual information that had no basis for the case against Barrett Brown, questioning the real motives of the Department of Justice. The information requested by the FBI for the case bypassed procedure and the prosecution team, and was sent direct to the FBI.

There’s a strong possibility that the lawsuit will be quashed before it makes headway; a lawsuit that arose from an imprisoned journalist spurring on valid investigations.

This article (Barrett Brown’s Donors Slap DOJ With Lawsuit for Illegally Monitoring Their Donations) is a free and open source. You have permission to republish this article under a Creative Commons license with attribution to the author AnonWatcher and AnonHQ.com.