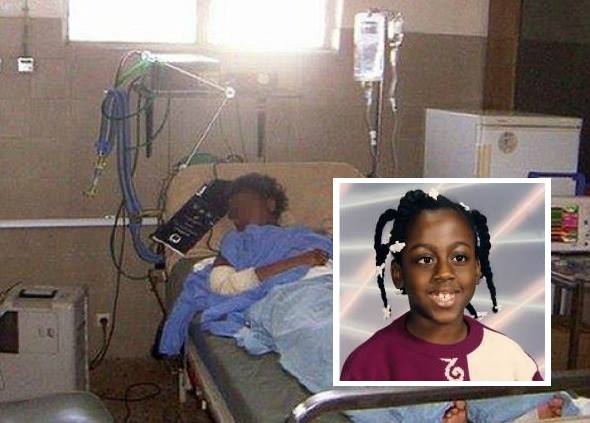 On the night of August 26, 2006, Dymond Milburn, a twelve year old African-American girl, was in her yard when she was suddenly and without cause, forcefully grabbed by police and charged with suspicion of prostitution. Milburn was outside flipping a circuit breaker when a van pulled up to her home and a man yelled, “You’re a prostitute! You’re coming with me!” There was a struggle in the yard, when Milburn’s parents came to her aid, yelling to police “that’s our daughter!” To compound the situation, police arrived at Milburn’s school several days later and arrested her again on charges of resisting arrest and assaulting an officer. The information released to the media was minimal, not indicating what led police to believe that Milburn was a prostitute.

What followed is truly bizarre. Milburn was tried on the aforementioned assault and resisting charges which resulted in a mistrial in 2007. The state prosecutors found it necessary to re-try that case against Milburn in February of 2009. This time, the case ended with a hung jury. This appears to be a case of attempting to cover up a mistake with more mistakes. I had a Sargent tell me once that the fastest way to squash a complaint, is to make an arrest. The unwarranted and malicious prosecution of Milburn seems to be an extension of this line of thought. Getting a conviction for even a minor charge, greatly reduces Milburn’s credibility in a civil trial.

Police had responded to the area after receiving a complaint from a local landlord about several young white prostitutes on his street. The witness, identified asTerry Ritter, testified that he phones police two to five times per week to report drug prostitution and other suspicious activities. Ritter observed the exchange between Milburn and Police and described it as “chaotic”, with one officer breaking from the scene to chase a drug dealer down the street. “”Everyone was losing their temper and control and yelling,” Ritter stated about the chaos on scene. “Then the calvary came.”

Galveston Police Officer David Roark also testified in the case. Roark was the officer who attempted to stop Milburn. He stated admitted that he did not hear the call or description over the radio and received the information third hand. He continued on, stating that when he arrived in the area he attempted to stop Milburn as she “was the only female in the area.” After attempting to stop Milburn, she ran away into a bush. He followed her into the bush and when he grabbed onto her, she came out “slapping my face.” According to Roark, Milburn then held onto a tree while he attempted to handcuff her, hence the resisting charge.

The Milburn’s have filed a civil suit against the Galveston PD but to this date, the case has not been settled and the Milburn’s have not commented further its status. The suit alleges that Milburn suffered a bloody nose, black eyes, sprained wrist and was choked. This case predates the modern wave of police violence, however, the tactics used by police and prosecutors do not seem to have changed. The outcome of this civil suit will speak to the direction that the system is moving, and whether or not justice is simply a concept left to the history books.