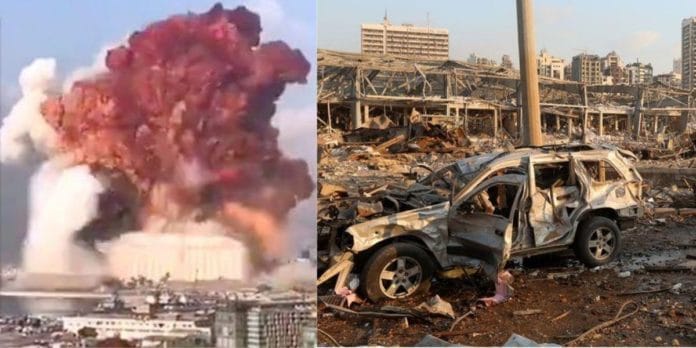 THE massive explosion which killed at least 100 people and left 4,000 injured in Lebanon’s capital Beirut is feared to have been started by a reckless welder.

Shocking images show flattened buildings, the walking wounded, and a sea of rubble in the wake of the explosion which could be heard 110 miles away in Cyprus.

More than 2,750 tons of ammonium nitrate detonated when a blaze spread to the warehouse where it had been stored for six years.

Security sources now claim a welder sparked the initial fire that in turn ignited the chemicals – causing  a blast the fifth the size of Hiroshima.

One insider told Reuters it was started by work being carried out to repair a hole in a warehouse at the Port of Beirut.

Ammonium nitrate is mainly used as a fertilizer, but has also been linked to terror attacks after being used in homemade bombs.

Lebanon’s General Security chief Abbas Ibrahim said the dangerous chemicals had been confiscated in 2013 from an Africa-bound ship.

The law firm prosecuting the case said the cargo had then been unloaded into a warehouse near the port.

“It is negligence,” the official source told Reuters, adding that the storage safety issue had been before several committees and judges and “nothing was done.”

The source said a fire had started at warehouse 9 of the port and spread to warehouse 12, where the ammonium nitrate was stored.

Badri Daher, Director General of Lebanese Customs claimed customs had sent six documents to the judiciary warning that the material posed a danger.

“We requested that it be re-exported but that did not happen. We leave it to the experts and those concerned to determine why,” he said.

Another source said a team that inspected the ammonium nitrate six months ago warned that if it was not moved it would “blow up all of Beirut”.

The explosion erupted next to a towering building called the Beirut Port Silos, which could be seen partially collapsed amid the rubble of nearby buildings.

The intensity of the blast threw victims into the sea and rescue teams were today still trying to recover bodies.

Many of those killed were port and custom employees and people working in the area or driving through during rush hour.

The blast also knocked out a crater some 200 meters (yards) across that filled with seawater.

Those leading the rescue effort today chillingly warned the death toll is likely to rise.

Images taken from the scene showed a thick cloud of gray smoke hovering over the Mediterranean before an enormous burst of red and orange fumes exploded into the sky.

Up to 300,000 people have also now been left homeless by the explosion which caused around £5bn of damage, claimed local reports.

At hospitals across the city people had been waiting all night for news of loved ones who had gone missing or were wounded.

Others posted requests for help online.

It is not yet known how many British nationals are among those caught up in the aftermath of a huge blast, the Foreign Office confirmed this morning.

Lebanese President Michel Aoun has declared a state of emergency for Beirut for two weeks – and vowed the “harshest punishments” for those responsible for causing the explosion.

Nearby structures were flattened, windows and doors were blown out, cars were crushed, and fires burned as the sun set over Beirut.

Horrifying video of the explosion shows an enormous mushroom cloud over the city followed by a shockwave – with witnesses comparing it to a “nuclear bomb”.

Toxic gases were been reported in the aftermath along with strange orange clouds, with the US Embassy warning any Americans in Beirut to stay inside.

Many people are feared to still be trapped under the rubble – including those stuck inside their damaged homes.

Locals woke to apocalyptic scenes this morning with smoke still rising from the port, where a towering grain silo was shattered.

Streets were littered with debris and damaged vehicles, and building facades were blown out.

“It’s like a war zone. I’m speechless,” Beirut’s mayor, Jamal Itani, told Reuters while inspecting the damage. “This is a catastrophe for Beirut and Lebanon.”

The head of the country’s Red Cross said: “What we are witnessing is a huge catastrophe. There are victims and casualties everywhere.”

Prime Minister Hassan Diab described the disaster as a “national catastrophe” and added “those responsible will pay the price”.

His wife and daughter were injured in the explosion after it damaged his residence at The Government Palace.

The deadly blast was one of the world’s biggest-ever peacetime explosions.

Damage was reported up to six miles from the explosion, with windows shattered and building facades shredded by the shockwave.

Beirut’s governor Marwan Abboud compared the blast to the Hiroshima and Nagasaki nuclear attacks that killed an estimated 225,000 people.

Breaking into tears as he arrived at the scene of the disaster, he said: “I ask the Lebanese people to pull together.”

British Prime Minister Boris Johnson said the UK stands ready to offer “any support we can” to Lebanon – and confirmed some caught up in the blast were Brits.

He added: “The pictures and videos from Beirut tonight are shocking.

“All of my thoughts and prayers are with those caught up in this terrible incident.”

The Queen sent a message to the President of the Republic of Lebanon to say she and the Duke of Edinburgh were “deeply saddened” by the news.

International aid in the form of emergency workers and medical personnel is now heading to Lebanon.

France says it is sending two planes with dozens of emergency workers, a mobile medical unit and 15 tonnes of aid.

Emmanuel Macron’s office says the aid should allow for the treatment of some 500 victims.

French peacekeepers stationed in Lebanon, a former French protectorate, have been helping since the explosions, they added.

Czech Interior Minister Jan Hamacek says Lebanon has accepted an offer to send a team of 37 rescuers with sniffer dogs to Beirut.

Meanwhile, US President Donald Trump suggested the explosion may have been a “bomb” – describing it as a “terrible attack”.

British grandmother Valerie Fakhoury, 65, from Darlington, who works at Beirut’s American Community School was left with blood pouring from her head in the blast.

All staff at the British embassy in Beirut are accounted for, but some have sustained “non-life-threatening injuries”.

British journalist Lizzie Porter, who lives just one mile from the scene, told the Daily Mail: “It was 6.10pm and there was a rumble like thunder.

“Then the whole apartment building shook like an earthquake.”

Witness Fady Roumieh said: “It was like a nuclear bomb. The damage is so widespread and severe all over the city.

“Some buildings as far as 2km are partially collapsed. It’s like a war zone. The damage is extreme. Not one glass window intact.”

Ambulances were been called in from across the country to aid the rescue effort.

Hours after the blast, ambulances still carried away the wounded as army helicopters helped battle fires raging at the port.

Some hospitals were too badly damaged to treat patients, with pictures showing doctors administering first aid in the street.

Initial reports had claimed the blast came from a firework storage site as video appeared to show small flashes and pops in the fire before the catastrophic explosion.