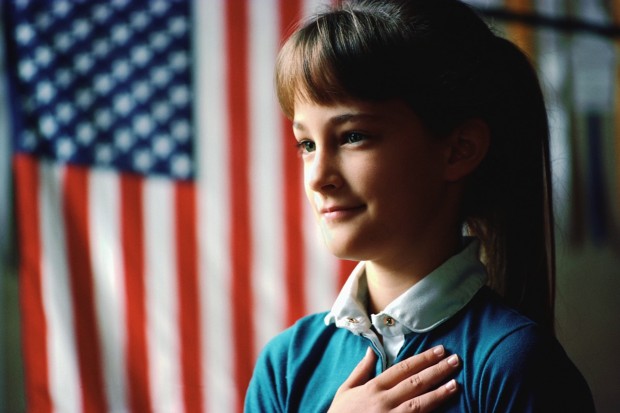 The American Humanist Association (AHA) has received an official complaint from a teenage girl, a student of Wilson Middle School, in Pennsylvania who has been threatened with denial of medical care by a nurse in her school for refusing to recite the American pledge of allegiance. The nurse reportedly told the girl that if she refused to say or stand for the pledge, she could refuse the right to treat her.

The girl, an eighth grader, then contacted AHA to file a complaint which resulted in a letter to the Carlisle County School District from attorney Monica Miller. In the letter by the AHA to the school demanding an explanation to the incident, it detailed the student’s version of the story: “Why didn’t you stand for the Pledge?” the nurse reportedly asked loudly. The student explained that she had the right not to participate. To which the nurse responded, “Fine! Then leave! I have the right to not service you!”

The girl then left the nurse’s office to call her mother but the nurse reportedly shouted, “She isn’t calling a parent until I have a long conversation with her!”

A counselor later met with the girl and told her that while she didn’t have to recite the pledge, she should stand in the hallway while others did so.

But when the girl tried politely to explain that she is under no obligation to stand in the hallway as such, the counselor replied that it was ‘district policy.’ So, the question is: is the so called district policy superior to federal law?

Independent observers say across the US, some students have been reprimanded for refusing to say the pledge of allegiance in its entirety or at all. They are even reprimanded for insinuating that it is not required, despite the 1943 Supreme Court case of West Virginia Board State Board of Education v. Barnette, in which it was clearly ruled by the Federal Court t that no one could be forced to recite the pledge of allegiance.

The AHA has demanded an official apology to the teenager and described this sort of behavior by the nurse as militant nationalism, which should be discouraged across the US. “The actions of the nurse are indefensible, as she provides an example of the kind of overzealous, dangerous patriotism that any true patriot would loathe. Moreover, the nurse’s refusal to give the child medical attention calls into question her fitness for the job,” the AHA said.

It is said that this blind adherence to symbols of the state is but a small manifestation of the militant nationalism that permeates American society today.  Activists say it is the same attachment to ‘being American’ that has authorized perpetual war, police brutality, domestic spying, and virtually anything politicians care to justify under the guise of patriotism which is used to violate the rights of citizens with impunity.

The School has responded that it is aware of the complaint from AHA and is currently investigating the matter, but it is clear that a simple apology is not enough to combat the deeply embedded culture of obedience that runs rampant in public schools, institutions, and in the minds of authoritarian Americans, who have been brainwashed by autocratic individuals calling themselves patriotic citizens.