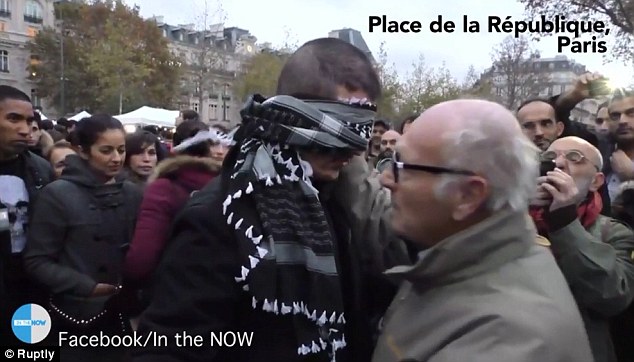 In the wake of the terror attacks by Islamist militants, a Muslim man decided to send a message of peace by blindfolding himself and asking mourners in Paris to embrace him – with a placard next to him that read: “I’m a Muslim, but I’m told that I’m a terrorist. I trust you, do you trust me? If yes, hug me”.

The heartwarming video shows hundreds of tearful onlookers approaching the man and giving him a hug at the Place de la Republique, a hub for tributes and vigils.

Watch What Happened When A French Muslim Stood Blindfolded in …Watch this and you will get chills. Shared by Occupy Democrats, LIKE our page for more.

After taking off his blindfold the man said, “I would like to thank every one of you for giving me a hug. I did this to send a message to everyone. I am Muslim, but that doesn’t make me a terrorist. I never killed anybody. I can even tell you that last Friday was my birthday, but I didn’t go out. I deeply feel for all the victims’ families. I want to tell you that ‘Muslim’ doesn’t necessarily mean ‘terrorist’. A terrorist is a terrorist, someone willing to kill another human being over nothing. A Muslim would never do that. Our religion forbids it.”

This Article (Blindfolded Muslim Asks Parisians For Hugs. The Response Is Heartwarming.) is free and open source. You have permission to republish this article under a Creative Commons license with attribution to the author and AnonHQ.com.