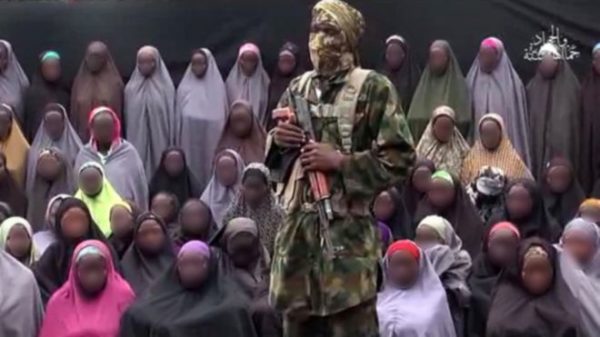 The Nigerian government has announced that it has successfully secured the release of up to 21 schoolgirls who were kidnapped by Boko Haram terrorists, from the small town of Chibok in Borno State, northeastern Nigeria.

On April 14, 2014, Boko Haram fighters stormed a school in the town, terrorizing residents before making away with more than 300 of the schoolgirls. The abduction of the girls gained prominence in the Western mainstream media. The first lady of the United States, Michelle Obama, led a social media campaign known as #BringBackOurGirls. The campaign went viral, with participants urging the terrorists to return the students. According to the spokesman of the Nigerian president, Garba Shehu, the latest release of the girls was the outcome of negotiations between the government and the terrorists. He revealed four jailed terrorists were freed by the government in exchange of the 21 girls.

Shehu further disclosed on Twitter that the International Committee of the Red Cross (ICRC) and the Swiss government had acted as mediators in the talks with Boko Haram. He added that negotiations were continuing, and that all the girls will be secured by the government.

BBC claims that a security official has said the freed Boko Haram fighters were taken to a meeting point close to the border with Cameroon. Under the supervision of the ICRC, the girls were then released and the terrorists were handed over to their representatives. The girls were then transported to the city of Maiduguri, the birthplace of Boko Haram. They were placed under the supervision of the security forces stationed in the city.

From Maiduguri, the girls will be flown to the capital, Abuja, where they will be examined by a team of doctors and psychologists, according to Nigeria’s Information Minister, Lai Mohammed. Mohammed also said the government was confident that this “credible first step” would lead to the eventual release of the remaining girls.

In the past, Boko Haram have released videos showing the girls. Its leader, Abubakar Shekau is seen in some of those videos threatening to carry out more attacks on the Nigerian government, as well as against foreign countries providing support to the government. Boko Haram pledged support to the so-called Islamic State of Iraq and Syria (ISIS), last year. Since then, two factions have emerged within the group. It is believed the two factions disagree on the operations of the group. One group believes it is right to kidnap and kill civilians when necessary to advance the group’s cause; the other holds that the group should, rather, fight the military and avoid civilians.  Recently, ISIS released a statement that it has recognized the faction led by one Abu Musab al-Barnawi.

The Shekau faction has since denounced the leadership of al-Barnawi.  Shekau released an audio statement on Aug. 3, 2016, claiming that the al-Barnawi has led an unsuccessful coup against him. Security experts say the split within the group has made the situation on the ground more complicated, regarding the freeing of all the kidnapped girls. It is believed the girls are being held by the Shekau faction. When this current Nigerian government was elected in 2015, its leader, Muhammadu Buhari pledged to do all he could to free the girls. President Buhari stated that his government is prepared to negotiate with the terrorists.

However, the negotiations failed and the government decided to use force to free the girls. The terrorists are believed to be hiding in the Sambisa Forest, a vast forest located in the northeastern part of the country. The girls, too, are held in the forest. The Nigerian military backed by some Western countries have been carrying out airstrikes against the terrorists in the forest. But the air campaign is not proving successful, and it is also putting the lives of the girls in danger. The government has therefore, decided to finally opt for negotiation.

Boko Haram claims to be fighting the Nigerian government, to create an Islamic State. The group has targeted mosques and markets with suicide bombers. Since the group began its violent campaign in 2009, hundreds of Muslims in the northern part of the country have been killed.

This article (Boko Haram Exchanges 21 Kidnapped Chibok Schoolgirls for its Jailed Fighters) is a free and open source. You have permission to republish this article under a Creative Commons license with attribution to the author and AnonHQ.com.