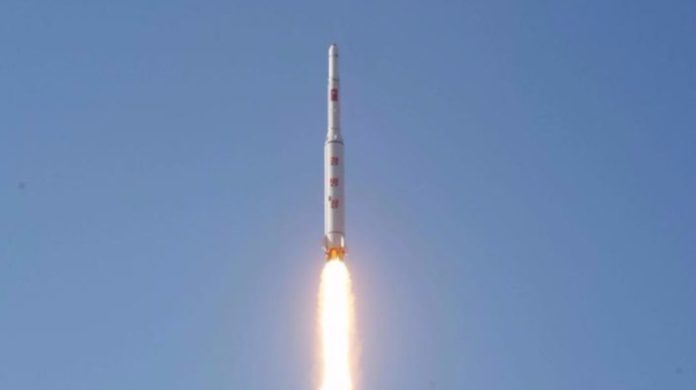 UPDATE: Talks are scheduled for Washington on the 8th to discuss increased sanctions against North Korea, military action or resume negotiations. This comes after reports filtered through North Korean news outlet KCNA announcing the recent strikes were a practice run for striking a US military base in Japan.

KCNA stated that the exercise was “tasked to strike the bases of the US imperialist aggressor forces in Japan in contingency.”

It has been speculated that considering these hostilities, the implementation of the THAAD defensive missile system in South Korea may be “brought forward,” Sky News reported.

North Korea has fired another four ballistic missiles on Monday, with three of them landing in Japan’s economic zone, approximately 200-nautical miles (300km) offshore Japan, near the Oga peninsula. The area where the missiles landed in the ocean is where Tokyo has exclusive sovereign rights for resource exploration and exploitation.

The firing of the four missiles follows the commencement of the US-South Korean joint annual military drills that run until late April. The said drills are a contentious point between North and South Korea, with North Korea claiming them an act of invasion rehearsal.

The launches were reportedly made from the North Pyongan province in the Tongchang-ri area where other launches have been conducted. They follow last week’s warnings from the North’s General Staff of the Korean People’s Army that Pyongyang’s reaction to the two-month long South Korean army drills with the US would be the “toughest” yet. The official North Korean news outlet, KCNA, also had quoted the anonymous spokesman for the Korean People’s Army that the North will “mercilessly foil the nuclear war racket of the aggressors with its treasured nuclear sword.”

According to KCNA, the military said in a statement, “Our army will counter them with the toughest counteractions as it already declared.

“This stand of ours we clarified before the world is by no means empty talk.”

The missiles launched travelled an approximate distance of 1,000 miles. One missile has not been ruled out as being an ICBM that potentially could have reached the United States coastline. The fourth missile was said to have landed just outside the Japanese economic zone exclusive to the country. North Korea has received international condemnation for its aggression in the region, with China being the latest to implement their own sanctions, refusing to accept coal from the isolationist country. The suspension of coal imports will hit the North Korean currency hard, accounting for 90 percent of its coal trade and making up a bulk of its income.

UN resolutions were also implemented but appear to be having little to no influence in swaying Kim Jong-un’s stance.

Only last month, Kim Jong-un’s half-brother Kim Jong Nam was allegedly assassinated at Kuala Lumpur airport. The Feb. 13 killing has raised questions on the use of the deadly VX nerve agent being manufactured for larger-scale use.

The North Korean situation will continue to be monitored closely.

This article (BREAKING NEWS: North Korea Launches 4 More Missiles, 3 Land in Japanese Economic Zone, 200 Miles from Coast) is a free and open source. You have permission to republish this article under a Creative Commons license with attribution to the author AnonWatcher and AnonHQ.com.