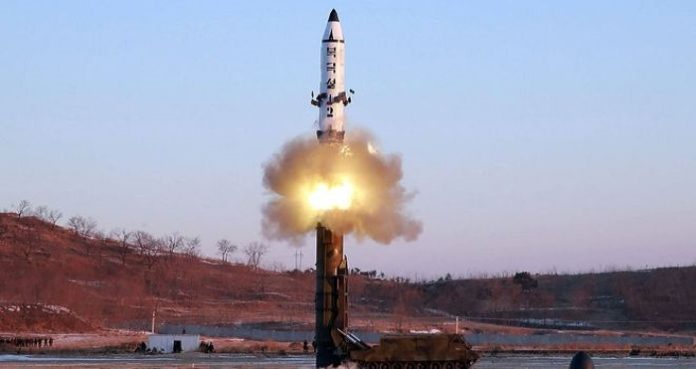 SEOUL, South Korea (AP) — North Korea on Sunday test-launched a ballistic missile that flew about 700 kilometers (435 miles), South Korea’s military said, a possible response to the election four days ago of a new South Korean president and as U.S., Japanese and European militaries gather for war games in the Pacific.

South Korea’s Joint Chiefs of Staff confirmed the early morning launch but had few other details, including what type of ballistic missile was fired. A statement said that the missile was fired from near Kusong City, in North Phyongan province, and that the South Korean and U.S. militaries are analyzing the details.

Outsiders will be especially interested in what kind of projectile was fired. While North Korea regularly tests shorter-range missiles, it is also working to master the technology needed to field nuclear-tipped missiles that can reach the U.S. mainland.

North Korea’s past long-range satellite launches have been called clandestine tests of ICBM technology, but it is not believed to have tested a true intercontinental ballistic missile yet. The Trump administration has called North Korean ballistic and nuclear efforts unacceptable and has swung between threats of military action and offers to talk as it formulates a policy.

The launch also comes as troops from the U.S., Japan and two European nations gather on remote U.S. islands in the Pacific for drills that are partly a message to North Korea. The USS Carl Vinson, an aircraft supercarrier, is also engaging with South Korean navy ships in waters off the Korean Peninsula, according to Seoul’s Defense Ministry.

Last week South Koreans elected a new president, Moon Jae-in, who favors a much softer approach than his conservative predecessor, Park Geun-hye, who is in jail awaiting a corruption trial. North Korea needs tests to perfect its missile program, but it also is thought to stage its launches after the elections of new U.S. and South Korean presidents in an attempt to gauge a new administration’s reaction.

Moon called an emergency national security meeting Sunday, but he didn’t immediately make any statement on the launch.

Moon, the first liberal leader in Seoul in nearly a decade, said as he took his oath of office that he’d be willing to visit the North if the circumstances were right. President Donald Trump has also said he’d be “honored” to talk with leader Kim Jong Un under favorable conditions.

During the South’s so-called “sunshine” era of the late 1990s and early to mid 2000s, liberal South Korean leaders held two summits with Kim Jong Un’s father, the late Kim Jong Il, and shipped huge amounts of aid to the North. Critics say this only helped the elite in Pyongyang build their missile and nuclear programs, while supporters point to the bloodshed, threats of war and nuclear development of the last decade as proof that the conservative approach was no better.

Moon has moved more quickly on domestic economic goals than foreign policy. But analysts say that North Korea’s weapons program is likely too far advanced for him to be able to return to the type of sunshine policies his liberal predecessors favored.