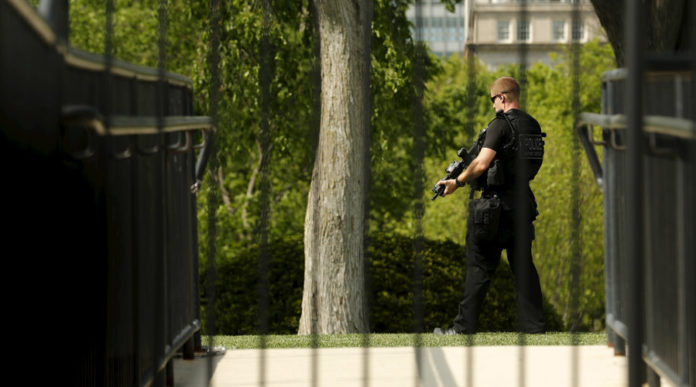 USSS is investigating suspicious package; security perimeter established & members of the public & media are being moved to safe a distance

Reporters in the West Wing waiting for the lockdown to end. pic.twitter.com/UhT9BwAdom

Secret Service locked the press inside the briefing room after evacuating the North lawn. pic.twitter.com/o3VC7yI21P

NEW: Secret Service tells me that the man taken into custody had a warrant out for his arrest

NEW: Secret Service tells me a bomb robot is being sent to investigate the package

Following his declaration, they promptly apprehended him, established a security perimeter, instituted road closures, moved visitors to a safe distance, and took the media off the North Lawn, though the area was later reopened.

Suspicious package near @WhiteHouse grounds cleared. All road closures related to this incident are lifted.

The incident is the second intrusion on the White House grounds since Donald Trump took office. On March 10, an intruder crossed a five-foot outer fence near East Executive Avenue and the Treasury Department complex and managed to roam the White House grounds for more than 15 minutes before he was arrested by the Secret Service.

This article (BREAKING: Secret Service Swings into Action as Bomb Scare Puts White House on Lockdown) is a free and open source. You have permission to republish this article under a Creative Commons license with attribution to the author and AnonHQ.com.