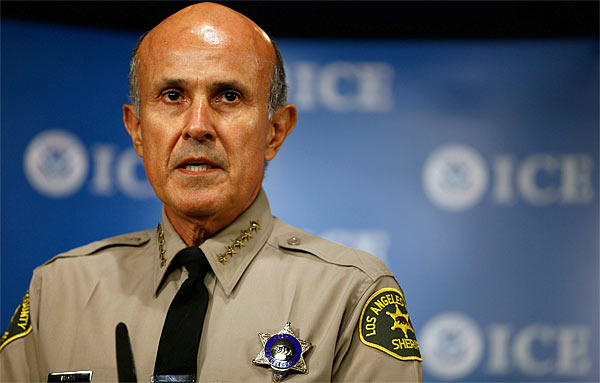 Lee Baca, the former head of the Los Angeles Sheriff’s Department, was convicted in federal court this week of obstruction of justice, conspiracy to obstruct justice and providing false statements. The charges stem from Baca’s obstruction of the federal investigation into corruption within the Los Angeles County Jail. Baca could face as much as twenty years in prison. Baca resigned as Sheriff in 2014. Many believe that he was the most powerful man in southern California for much of the fifteen years he held office. According to the Department of Justice report, the corruption investigation led to the firing and arrest of 17 jail employees. The report stated that inmates were routinely sexually harassed and humiliated. Jail employees also regularly beat and abused the inmates.

The trouble for Baca started when the FBI snuck a cell phone into the LA jail for a prisoner-turned confidential informant, Anthony Brown. His job was to report incidents of excessive force and violence committed upon inmates. After the cell phone was discovered, according to the FBI, Baca, his Under Sheriff Paul Tanaka, and Captain William Carey went into a frenzy of communication. They soon altered Brown’s inmate records and hid him from the FBI in the LA jail.

After the cell phone was discovered, FBI Agent Leah Tanner stopped interviewing inmates at the jail. Tanner testified in court that the conduct at the jail was authorized by Baca himself. She advised that the investigation was kept secret from the LA Sheriff to avoid unnecessary obstruction, which was what they ended up with after all. According to Tanner, LA Sheriff Deputies came to her home and threatened her with arrest. They advised her she was a suspect in a felony complaint, but didn’t reveal the charge. Their visit was intimidation.

The jury reached their verdict of guilty in just two days. The trial itself lasted for more than two weeks, and was actually Baca’s second trial. The first corruption trial ended in mistrial. As usual, the jury was unable to determine that the Sheriff had committed any crimes. The idea that police aren’t always the good guys is a concept that some have a hard time coming to grips with.

Baca was not happy with the verdict. He gave a statement to the media gathered outside the courthouse. “I appreciate the jury system, however, I disagree with this particular verdict. I am a faith based person. I look forward to winning on appeal. I love Los Angeles County. I love the United States of America and I love diversity. It’s just a privilege to be alive. That’s how I feel and I feel good.”

Sandra Brown, The US Attorney who handled the case stated, “The verdict sends a clear message that no one is above the law. Lee Baca knew what was right and what was wrong. He made a decision. That decision was to commit a crime, and he lead others in a conspiracy to obstruct a federal law enforcement investigation into what he described as his jails. When the time came, he lied. He lied to cover up his crimes.”

The conviction of Baca sends a message to law enforcement everywhere that even they are not above the law. Baca will be sentenced at a future hearing.

This article (Former LA Sheriff Found Guilty of Corruption and Obstructing Federal Investigation) is a free and open source. You have permission to republish this article under a Creative Commons license with attribution to the author and AnonHQ.com.