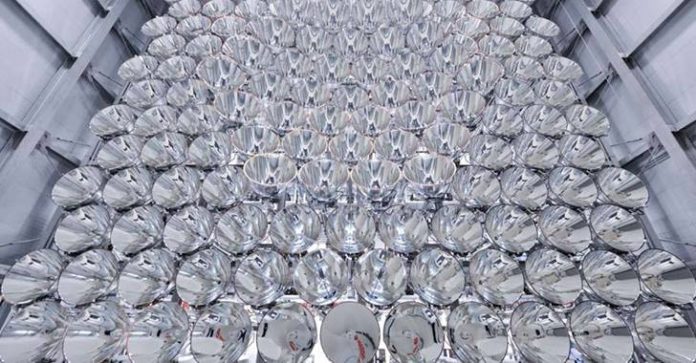 by Josh Mur at theantimedia.org

Scientists in Germany have opened doors in the realm of renewable energy and solar experimentation. Using a 50-foot structure and 149 industrial-grade spotlights, Kai Wieghardt and his team have created “Synlight,” the “world’s largest artificial sun.”

The $3.8 million structure stands in Juelich, Germany, and can focus its spotlights onto an area as small as 61 square inches, generating up to 10,000 times the amount of normal radiation in a single area and reaching temperatures of up to 5,400 degrees Fahrenheit. But what is its use?

It can be used to test simple things like solar panels and other solar-fueled mechanisms. Synlight can also test the effects of solar radiation on satellites and machines that endure prolonged radiation exposure. However, the most interesting application of Synlight is the potential to use it to separate hydrogen and oxygen from water in mass amounts, creating a consistent source of hydrogen and bringing hydrogen-powered cars, houses, and societies that much closer to the gates of reality.

Still, good news often comes with a catch. While the potential opportunities and progress that can be made with such a concept are plentiful, the fact remains that the energy powering this massive “artificial sun” doesn’t come from thin air. After a mere four hours of use, Synlight consumes the same amount of energy a four-person household consumes in an entire year. As one might imagine, this makes operating Synlight very expensive, though it is arguably a worthwhile price to pay for a future of clean and renewable energy.