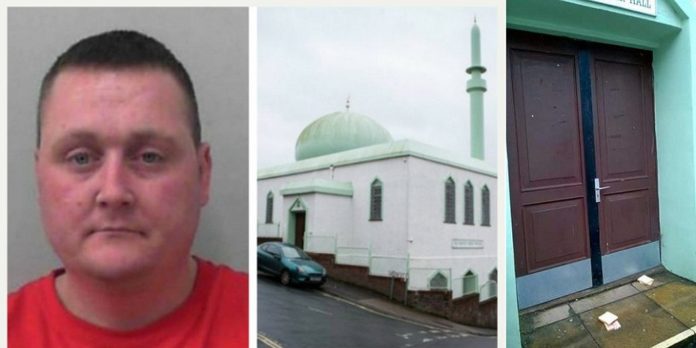 In January 2016, Kevin Crehan and three accomplices, all from the town of Totterdown in Bristol, attacked a mosque in the town with rotten rashers of bacon.

Bacon is a meat product prepared from pork [pig meat]. The Islamic Holy Book, the Quran prohibits its adherents from the consumption of pork, in many verses.

One such verse is Al Baqara 2:173: “He [Allah] has only forbidden to you dead animals, blood, the flesh of swine [pig], and that which has been dedicated to other than Allah.” This makes pork offensive to all Muslims. The gang knowing this decided to use the meat to attack the mosque. According to The Sun, the attackers left rashers of bacon on the door handles of the mosque, as well as putting bacon sandwiches on the doorstep.

After carrying out the act, the hooligans absconded. However, unfortunately for them there was a CCTV camera monitoring the mosque. When the incident was reported to the police and the footage reviewed from the secret camera, it showed two men standing close to the mosque holding a St George flag with the words “no mosques” written on it. It also showed them leaving the rotten pig at the mosque.

Mr Crehan was easily identified, leading to the arrest of the others. The other accomplices include Mark Bennett, Alison Bennett and Angelina Margaret Swales.

Bristol Crown Court slapped Crehan with a 12-month jail term for a racially-aggravated public order offence. Bennett was handed a nine-month sentence, Alison Bennett was given six months, and Swales four months. They were sentenced in July 2016. After serving almost half of his punishment, prison officials have announced that Crehan has died. The cause of his death is not yet known.

Prison officials further added that they would investigate the cause of Crehan’s death per the practice of the prison service. “As with all deaths in custody, the independent Prisons and Probation Ombudsman will investigate,” the prison spokesperson added.

Islamophobia is spreading in Western countries. In fact, since the then Grand Old Party nominee Donald Trump made the disparaging comments that Muslims should be banned from entering the United States, hate crimes against Muslims have surged in the West. Many right-wing political leaders have seized on the statement of Trump to whip up public opinion against all Muslims, branding them as terrorists. Even before Trump’s comments, other political leaders in the United States had unfavorable views on Islam. The Daily Mail reports that since the 9/11 attack in the United States, the number of hate crimes against Muslims has grown significantly, from between 20 and 30 per year to 500. The Washington Post puts the number at 100-150, roughly five times higher than before 9/11. The election of Trump has further worsened the situation.

According to observers, the current happenings in the United States and other Western countries are what terrorist organizations, such as the so-called Islamic State of Iraq and Syria, want. The terrorists’ main goal is to stir reprisal attacks against Muslims in the West, in order to convince them [Western Muslims] that the West hates Islam.

This article (British Man Who Attacked a Mosque with Rotten Pig Meat Dies in Jail After Serving Half Sentence) is a free and open source. You have permission to republish this article under a Creative Commons license with attribution to the author and AnonHQ.com