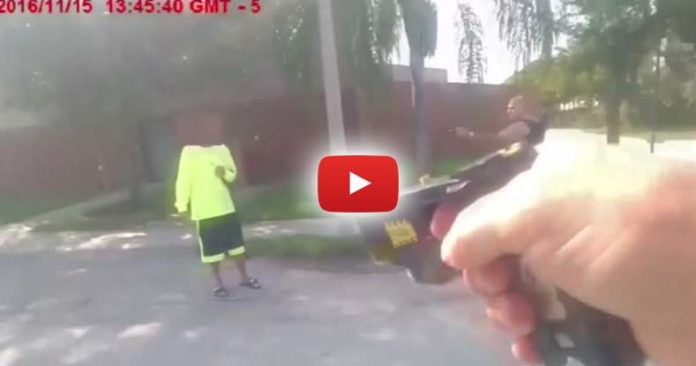 A video has been released showing two Miami cops disarming an emotionally disturbed man armed with a knife. Despite the ample opportunity and backing they would have received from their superiors, these two cops showed us what real police bravery looks like. After several minutes of pleading with the man, they were able to take him into custody without anyone getting hurt.

The two unnamed officers work for the Miami-Dade Metro Police Department. They were dispatched to a 911 call of a mentally disturbed man wielding a knife. The man was actually the person who called, advising dispatch that he would hurt officers upon arrival. Despite his threats, the two officers approached him and did everything they could to see the situation resolved without anyone dying.

The video captures one officer say, “Come on, buddy. Come on, don’t do this. I don’t want to hurt you, I don’t want to hurt you, put it down.” The other officer says, “Listen dude, relax, relax, just come on, drop it. Listen to me. Come on, talk to me brother. Look at me.” If you want to know why these officers didn’t shoot, whereas we have seen dozens of similar videos that didn’t end well, it’s because they didn’t want to. It’s that simple. Cops kill people in non-threatening situations because they want to. This video is the proof.

To get a better understanding of police use of force policy, you have to understand that in order to save this man’s life, these officers took a big risk. Not in as far as being threatened with the knife, but as far as violating policy. Police policy dictates that if a subject comes at you with fists, you come at them with a Taser. If they come at you with a knife, you come at them with a gun. One of the first rules of police work is that you don’t bring a Taser to a knife fight. But these brave cops did anyway.

Another factor, which would have left this man dead if it were any other cops, is that he was within the perimeters of the 21-foot rule. In law enforcement, the 21-foot rule states that if you are confronted by a man with a knife, even if he is non-threatening, if he is within 21 feet, police are authorized to execute him, no questions asked. Many times, we see videos of cops murdering people who were not threatening anyone but did have a weapon. The 21-foot rule is the legal justification for those killings. If ever there was proof that the policies police follow are blatantly wrong, it is in this video.


These cops are heroes. Heroes save people, they don’t kill people. Cowards kill people. Most cops hide behind archaic policy that dictates they kill in certain circumstances. This video shows that cops can do their jobs and not resort to taking a life when they don’t have to. Let’s face it, for most cops, pulling the trigger would have been the fastest and easiest way to end this situation.

This article (Viral Video Shows Two Miami Cops Disarm Emotionally Disturbed Vet Without Killing Him) is a free and open source. You have permission to republish this article under a Creative Commons license with attribution to the author and AnonHQ.com.