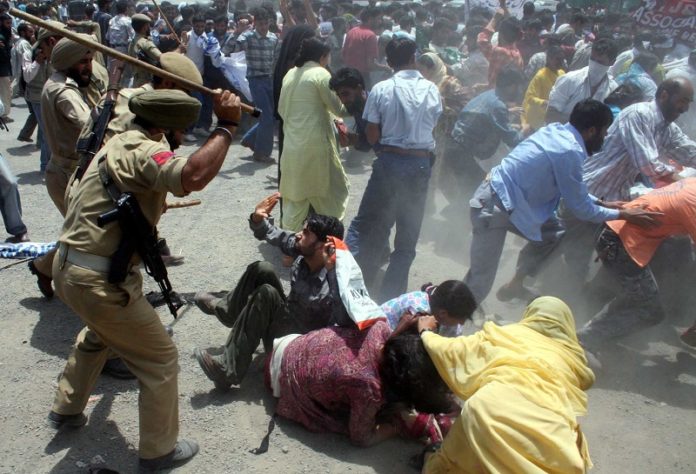 You Think what happens in Gaza is the example of human Atrocity? Well, Then you should know about Kashmir. Since 1988 over 96,000 civilians including women and children have
died at the hands of the Indian army and paramilitary forces in the most brutal ways.

They want India to end the brutal occupation of Kashmir, their homeland. The Kashmir dispute is the oldest unresolved international conflict in the world today. Pakistan considers Kashmir as its core political dispute with India. So does the international community, except India.

India’s forcible occupation of the State of Jammu and Kashmir in 1947 is the main cause of the dispute. India claims to have ‘signed’ a controversial document, the Instrument of Accession, on 26 October 1947 with the  Maharaja of Kashmir, in which the Maharaja obtained India’s military help against popular insurgency. The people of Kashmir and Pakistan do not accept the Indian claim. There are doubts about the very existence of the Instrument of Accession. The United Nations also does not consider Indian claim as legally valid: it recognizes Kashmir as a disputed territory. With the exception of India, the entire world community recognizes Kashmir as a disputed territory. The fact is that all the principles on the basis of which the Indian subcontinent was partitioned by the British in 1947 justify Kashmir becoming a part of Pakistan: the State had majority Muslim population, and it not only enjoyed geographical proximity with Pakistan but also had essential economic linkages with the territories constituting Pakistan. since 1989, India has maintained a military occupation of the Kashmir Valley by more than half a million soldiers, police, paramilitaries, and other armed “security” forces brought in from outside Kashmir.

This occupation has had all the typical attributes of any military occupation, in unusually intense and prolonged form. For most of the last 25 years, the Kashmir Valley has been under various flavors ofde facto or de jure martial law, with soldiers everywhere, army camps next to every village, checkpoints on every city block, curfews, house to house searches, legalized arrest and detention without trial, and official suspension of many of the norms of democratic governance and civil liberties.

Since the departure of the principal non-Muslim population group, the Hindu Pandits, in the 1990s, essentially all of the remaining population in the Kashmir Valley — other than the occupation forces — has been Muslim. That has allowed the Indian forces to define the entire valley as a free-fire zone in which the Kashmiri Muslim population is considered and treated as the enemy: presumed to be either “militants” or their sympathizers, and fair game for summary killing. Military and paramilitary forces have effectively complete impunity for any actions against civilians, which have come to include systematic torture of detainees, rape of civilian women, collective reprisals (against families, neighborhoods, and villages), shooting to death of children who just are too young to understand anything, and attacks targeting medical personnel, human rights activists, and
journalists.

To put the death toll in perspective, this month the Kashmir Valley has suffered from its worst natural disaster in a century: a 100-year flood that has killed perhaps 500 people. But on average, several times this many  Kashmiris have been killed by Indian “security” forces in Kashmir every year for the last 25 years — a total of at least 96000 out of a population of around 7 million people in the valley.

Below is the statistic that saw the Indian brutality in Kashmir,
according to Kashmir Media Service:

“As the conflict in Kashmir enters its fourth year, central and state authorities have done little to stop the widespread practice of rape by Indian security forces in Kashmir. Indeed, when confronted with the evidence of rape, time and again the authorities have attempted to impugn the integrity of the witnesses, discredit the testimony of physicians or simply deny the charges everything except order a full inquiry and prosecute those responsible for rape”. (Asia Watch and Physicians for Human Rights, May 09, 1993)

“Since January 1990, rape by Indian occupation forces has become more frequent. Rape most often occurs during crackdowns, cordon and search operations during which men are held for identification in parks or schoolyards while security forces search their homes. In raping them, the security forces are attempting to punish and humiliate the entire community.” (‘Pain in Kashmir: A Crime of War’ issued jointly by Asia Watch and
Physicians for Human Rights, May 09, 1993)

“By beginning TV cameras and prohibiting the presence in Kashmir of the International Red Cross and of human rights organization, the Indian authorities have tried to keep Kashmir out of the news.” (`Kashmiri crisis at the flash point’, The Washington Times, by columnist Cord Meyer, April 23, 1993)

“(On February 23, 1991), at least 23 women were reportedly raped in their homes at gunpoint (at Kunan Poshpora in Kashmir). Some are said to have been gang-raped, others to have been raped in front of their children … The youngest victim was a girl of 13 named Misra, the oldest victim, name Jana, was aged 80”. (Amnesty International, March 1992)

“The most common torture methods are severe beatings, sometimes while the victim is hung upside down, and electric shocks. People have also been crushed with heavy rollers, burned, stabbed with sharp instruments, and had objects such as chilies or thick sticks forced into their rectums. Sexual mutilation has been reported”. (Amnesty International, March 1992)

“The worst outrages by the CRPF (Central Reserve Police Force) have been frequent gang rapes of all women in Muslim villages, followed by the execution of the men”. (Eric Margolis, The Ottawa Citizen, December 8, 1991)

“Subjugated, humiliated, tortured and killed by the 650,000-strong Indian army, the people of Kashmir have been living through sheer hell for more than a year, the result of an increasingly brutal campaign of state repression. India hides behind its carefully-crafted image of “non-violence” and presents itself in international forums as a model of democracy and Pluralism. Yet, it is unable to stand up the scrutiny of even its admirers. All journalists, especially television crews, were expelled from the Valley. With no intrusive cameras to record the brutalities of the Indian forces, the world has been kept largely in the dark.” (The Toronto Star, January 25, 1991)

“Young girls were now being raped systematically by entire (Indian) army units rather than by a single soldier as before. Girls are taken to soldier’s camps and held naked in their tents for days on end. Many never return home….Women are strung up naked from trees and their breast lacerated with knives, as the (Indian) soldiers tell them that their breast will never give milk again to a newborn militant. Women are raped in front of their husbands and children, or paraded naked through villages and beaten on the breasts.” (The Independent, September 18, 1990).
October 26 is coming, and it’ll mark 67 years of India’s brutal occupation of Kashmir. I request you Anons to share this issue with the whole world, and make the world realize that Kashmir needs their attention. While India celebrates its freedom on 15th August, Kashmiris are caged. Curfew is imposed, the internet and other modes of communication are snapped.We are really living like slaves in our own homeland.