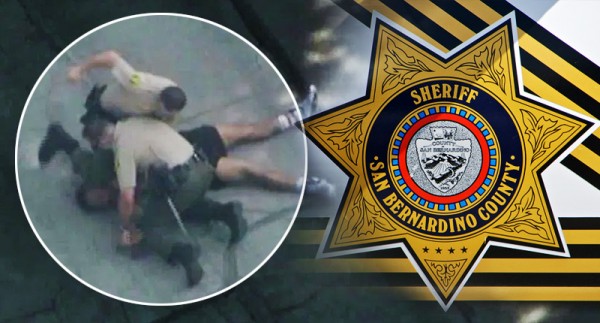 Two police officers from the state of California, United States, have been caught on video by a local television station, beating an unarmed black suspect on a highway.

The incident is said to have happened in San Bernardino County, located in the southern part of the state. In the video, the officers were seen repeatedly punching the helpless African-American, later identified as 25-year-old Donovan Gardner. The video was captured by a KTLA news helicopter.

The Huffington Post reported that officers had pursued a burglary suspect for 40 minutes, from Rancho Cucamonga to Pasadena… one police cruiser reportedly collided with a tree during the chase. A representative from the California Highway Patrol Unit also confirmed this account by The Post. The officers became angry after one of them crashed into the tree during the chase. Although the fleeing driver did not cause the accident, aside from fleeing, the officers decided to take the law into their own hands after arresting him.

In the aerial video captured at the end of the chase, the suspect is seen lying on the ground with his hands behind his back while one deputy held a pistol on him and a second deputy approached him. Then the beating started.

KTLA said the officers threw at least 15 punches. An eyewitness to the incident said, “There were two officers and they were pummeling him from each side.”

After this brutal assault, paramedics came and took Gardner, who was very weak as a result of the beating, into an ambulance. Two other suspects were said to have been arrested in connection with the incident.

Raw Story reports that the incident comes just six months after a news helicopter caught San Bernardino County Deputies violently attacking another suspect after a car chase into the desert.

The county sheriff’s department spokesman said there was nothing out of order in the officers’ treatment of the suspect.

Sgt. Phill Dupper said the car chase, “was a violent criminal act by criminals that had no regard for anyone’s life.”

His comments have triggered a public backlash. The video was later shared on many social media platforms, with many showing solidarity with the suspect and condemning the actions of the officers.

Even an expert in use-of-force, Geoffrey Alpert, told a local media that the arrest was excessively violent, and it is “an example of what happens to officers when they’re so angry at the suspect and they lose perspective, and get what we call an adrenaline dump,” adding that, “there is no justification for those blows by the officers.”

This Article (California Officers Caught On Live Television Beating An Unarmed Black Man [Video]) is free and open source. You have permission to republish this article under a Creative Commons license with attribution to the author and AnonHQ.com