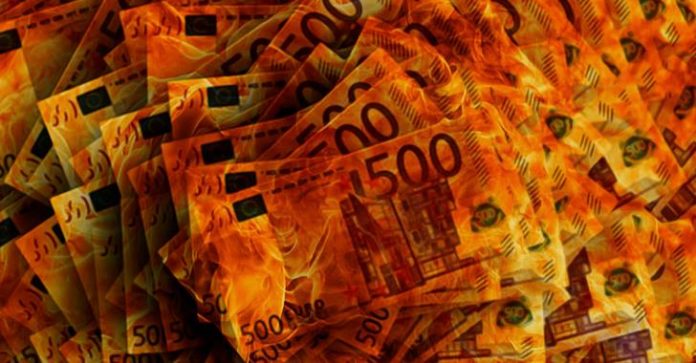 The European commission has quietly launched the next offensive in the war on cash.

By: Shaun Bradley / AntiMedia   In the shadow of Donald Trump’s spree of controversial actions, the European commission has quietly launched the next offensive in the war on cash. These unelected bureaucrats have boldly asserted their intention to crack down on paper transactions across the E.U. and solidify a trend that has been gaining momentum for years.

The financial uncertainty amplified by Brexit has incentivized governments throughout Europe to seize further control over their banking systems. France and Spain have already criminalized cash transactions above a certain limit, but now the commission has unilaterally established new regulations that will affect the entire union. The fear of physical money flowing out of the trade bloc has manifested a draconian response from the State.

The European Action Plan doesn’t mention a specific dollar amount for restrictions, but as expected, their reasoning for the move is to thwart money laundering and the financing of terrorism. Border checks between countries have already been bolstered to help implement these new standards on hard assets. Although these end goals are plausible, there are other clear motivations for governments to target paper money that aren’t as noble.

Negative interest rates and high inflation are a deadly combination that could further destabilize the already fragile union in the future. With less physical currency circulating, these trends ensure that the impact of any additional central bank policies will be maximized. If economic conditions deteriorate, the threat of citizens pulling cash out of their accounts and starting a bank run is eliminated in a cashless system. So long as the people’s wealth is under centralized control, funds can be shifted at will to conceal any underlying problems. But the longer this shell game is allowed to persist, the more painful it will be when reality overrides the manipulation.

Since former Chief Economist at the International Monetary Fund (IMF), Kenneth Rogoff, published a paper last year advocating for the U.S. $100 bill to be removed, governments around the world have pushed forward their agendas towards a cashless society. He wrote:

“There is little debate among law-enforcement agencies that paper currency, especially large notes such as the U.S. $100 bill, facilitates crime: racketeering, extortion, money laundering, drug and human trafficking, the corruption of public officials, not to mention terrorism. There are substitutes for cash—cryptocurrencies, uncut diamonds, gold coins, prepaid cards—but for many kinds of criminal transactions, cash is still king. It delivers absolute anonymity, portability, liquidity and near-universal acceptance.”

This announcement comes just months after the 500 euro note was discontinued, and it follows India’s lead in subverting the financial independence of their citizens. The incremental steps currently being taken may look trivial in isolation, but the ultimate end is to lay the foundation for an entire network for economic repression.

The German people have placed themselves in strong opposition to the action and previously pushed back hard against domestic legislation that would have limited cash. Nearly 80% of all transactions in Germany are made with paper currency, putting Europe’s economic engine in direct conflict with the vision coming out of Brussels.

The spillover effect has affected new forms of investment, like Bitcoin, which witnessed an astronomical rise over the last months and has been brought back into the discussion as a viable alternative to fiat currencies. Of course, the E.U. Commission is also attempting to impose similar limitations on crypto-currencies to make sure no transactions fall outside of their domain. The ECB and BOJ are working towards a trojan horse blockchain network that will serve only to entrap those naive enough to trust it.

Former Treasury Secretary Larry Summers wrote last year that the E.U. would likely be the trailblazer of the West towards this new digital model:

“But a moratorium on printing new high denomination notes would make the world a better place. In terms of unilateral steps, the most important actor by far is the European Union. The €500 is almost six times as valuable as the $100. Some actors in Europe, notably the European Commission, have shown sympathy for the idea and European Central Bank Chief Mario Draghi has shown interest as well.”

Since the public’s attention has been drawn to emotional manipulations and political stunts, the threat the war on cash represents has gone unrecognized. Instead of feeding energy into systems meant to divide and conquer, individuals must educate themselves to secure their own financial futures. By submitting to the hive mind and following the media down whichever rabbit hole they choose, the most important issues of today will go unnoticed. The value of advocating for decentralized and physical alternatives to the banking system may not be easily grasped by the activists of today, but few other things have the potential to erode freedom on such a massive scale.

This article (Cash No Longer King: Europe Moves To Begin Elimination Of Paper Money) by Shaun Bradley is free and open source. You have permission to republish this article under a Creative Commons license with attribution to the author and TheAntiMedia.org