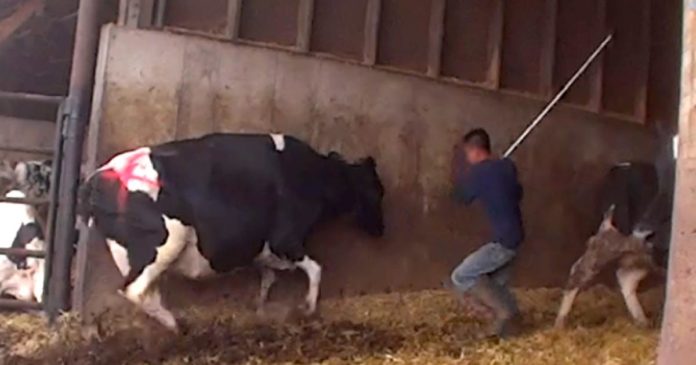 The dairy farm employee was caught abusing the animal through video surveillance.

A dairy factory farm worker was arrested on Friday after he was seen physically abusing an animal in his work environment, according to The Fresno Bee. Through the use of surveillance recording, a dairy supervisor told the authorities that he had seen the employee hitting a cow with a metal pipe. The tapes in question show the employee, Pablo Carcamo, hitting the cow with the pipe as she was being loaded into the milking station. Authorities have since arrested him on charges of animal abuse and he will face a judge on Tuesday. His bail has been set at $50,000.

Despite the shocking treatment of animals in an employee’s care, incidents like this are not uncommon on factory farms. An international non-profit organization, called Mercy For Animals, that is dedicated to preventing cruelty to farmed animals, has conducted more than 50 undercover investigations on farms throughout the United States, Canada, and Mexico. The result of every investigation has produced horrific results, providing clear evidence of animal cruelty. During one investigation conducted by Mercy For Animals in May 2014, workers were exposed at Canada’s largest dairy factory farm, Chilliwack Cattle Sales, beating, kicking, and punching animals through the use of undercover video. The footage also showed the workers using a combination of chains and tractors to pull the cows into the air, as well as poking and squeezing festering wounds, and even punching bulls in the testicles.

The shocking investigation led to 20 animal cruelty charges against Chilliwack Cattle Sales factory farm and its owners, which then led to convictions. The factory farm proceeded to plead guilty to three separate counts of animal cruelty, whilst Wesley Kooyman, one of the farm’s owners, pled guilty to one count. Kooyman was sentenced to the maximum monetary penalty allowable by law, alongside the company, which was $75,000 per count. Farm owner Kooyman was also prohibited from owning animals, as well as not being allowed to have any control over the factory farm for the period of one year. This was the first time that a factory farm and its owner have been convicted of animal cruelty that was conducted by the farm’s employees, after an undercover investigation conducted by an animal protection group. The investigation also led to BC agricultural minister, Norm Letnick, to reexamine and then amend the BC Prevention of Cruelty to Animals Act to incorporate the Dairy Code of Practice, which outlines the minimum guidelines when working with Canada’s dairy cows, with a particular focus on their treatment and welfare.

A further undercover investigation was conducted last year by the MFA at Perdue Farms in North Carolina. The latest investigation exposed the farm’s workers kicking chickens, before throwing them and violently stomping them to death. Danny Miranda, the employee caught on camera through the undercover investigation, pled guilty to three counts of criminal animal cruelty. He was then sentenced to 45 days of imprisonment, 12 months probation and a prohibition on working with animals in the future.

This article (Dairy Farm Worker Arrested After Being Caught Beating A Cow With A Metal Pipe) is free and open source. You have permission to republish this article under a Creative Commons license with attribution to the author and TrueActivist.com