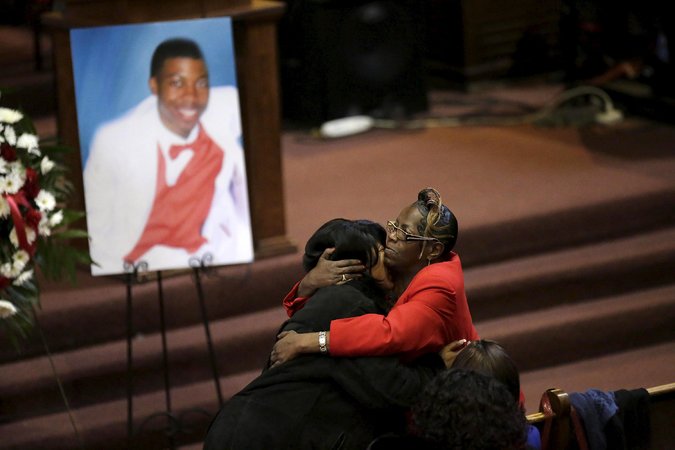 The family of 19-year-old Quintonio LeGrier, who was shot and killed has been sued by the Chicago police officer who pulled the trigger. The lawsuit, filed after the December shooting, which also saw a bystander killed, was filed for $10 million in damages citing “extreme emotional distress.”

The account following the lawsuit is the first explanation given to the public. The police officer, Robert Rialmo, stated that the lead up to the actions that caused him to fire the gun were “atrocious.” LeGrier was said to be wielding a baseball bat while his innocent neighbor, Bettie Jones, 55, witnessed the events unfolding. LeGrier had called the police to his house three times asking for police help. He was said to come down the staircase swinging the baseball bat twice. Several shots were then fired by Officer Rialmo, resulting in LeGrier and Jones’ deaths. One of Bettie Jones’ daughters consoled where the shooting took place.

The shooting is currently under investigation as the million-dollar lawsuit is lodged to seize money from the LeGrier family estate. According to Basileios J. Foutris, a lawyer for Mr. LeGrier’s estate, the lawsuit of 10 million dollars in based in “pure fantasy.”

“It’s a new low for the Chicago Police Department,” Mr. Foutris said. “First you shoot them, then you sue them. It’s outrageous. I can’t believe that this police officer has the temerity to turn around and sue the estate of the person who he killed.”

The unusual move to countersue the LeGrier family is not supported by the police department, and is “not involved in any way.” Officer Rialmo’s lawyer, Joel A. Brodsky, said it was rare but justified. “There is no question that he suffered very extreme emotional trauma and stress as a result of what Quintonio LeGrier did.”

The LeGrier shooting followed another shooting a month previous resulting in Laquan McDonald, 17, fatally shot after wielding a knife at officers. The footage of the incident showed Officer Van Dyke fire his gun at McDonald when he was veering away from police officers, contradicting police statements.

This Article (Chicago Police Officer Shoots and Kills 19-Year-Old, then Sues Family for $10 Million) is a free and open source. You have permission to republish this article under a Creative Commons license with attribution to the author AnonWatcher and AnonHQ.com.